Hungary's Prime Minister Viktor Orban has said his country wants to protect its economic links with Russia. Talks with Russian President Vladimir Putin focused on trade and energy, as well as EU sanctions against Moscow. 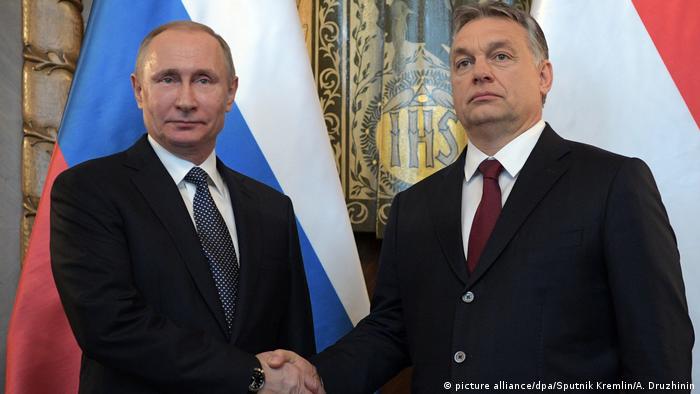 Following his meeting with Putin in the Hungarian capital on Thursday, Prime Minister Viktor Orban said Hungary, an EU and NATO member, was striving for "open and transparent" relations with Russia.

Trade between the two countries has suffered since the European Union imposed sanctions on Moscow in mid-2014 over Russia's role in the Ukraine crisis. The Kremlin denies backing pro-Moscow insurgents in eastern Ukraine.

"Hungary maintains its stance that non-economic problems cannot be handled with economic means ... we very much hope that soon we will see good Russian-European cooperation," Orban told reporters at a joint news conference with Putin.

On Tuesday, Hungarian Foreign Minister Peter Szijjarto said Hungary had lost out on $6.7 billion in exports since the bloc imposed the sanctions, which he said had failed to achieve their objectives.

Brussels has struggled to maintain unity on sanctions against Russia, which in December were extended until the end of July despite some member states increasingly questioning their efficacy. The bloc's commitment to maintaining those sanctions could be sidelined by other concerns including US President Donald Trump's foreign policies, Britain's divorce from the EU and nationalist parties rising in prominence ahead of elections in France, the Netherlands and in Germany.

During Thursday's press conference, Putin accused Kyiv of provoking this week's outbreak of violence in eastern Ukraine, saying it was a ploy to win support from the Trump administration. Kyiv has blamed pro-Russia rebels for the flare-up of fighting.

It was Putin's first visit to an EU member state since Trump was elected in November. Trump has promised to mend ties with Russia. Orban has publicly supported Trump and is considered one of Putin's best allies in Europe.

Orban on Thursday denounced what he labeled "a strong anti-Russian atmosphere" in the West.

With Trump in the White House, Hungarian Foreign Minister Szijjarto told Reuters he expected a "massive improvement" in US-Hungarian relations. Szijjarto has also criticized the Obama administration for trying to prevent Hungary warming up to Moscow.

The talks between the two leaders also focused on energy. Budapest depends on Russian gas imports, while Russia is also planning to expand Hungary's only nuclear power plant, Paks outside Budapest. That project has stalled due to EU regulatory demands but on Thursday Orban voiced hope that construction could finally start and Putin said that Russia could raise the amount of money it is loaning to Hungary to cover the full costs of the estimated 12 billion euro project.

"We are ready to finance the expansion 100 percent," Putin said.