Rio street band drums up support for Carnival without harassment | News and current affairs from Germany and around the world | DW | 22.02.2017

Rio street band drums up support for Carnival without harassment

Rio de Janeiro's first feminist samba block is rallying behind a campaign for a safe Carnival. They hope to stamp out the notion the year's biggest party is no place for a decent woman, Clare Richardson reports. 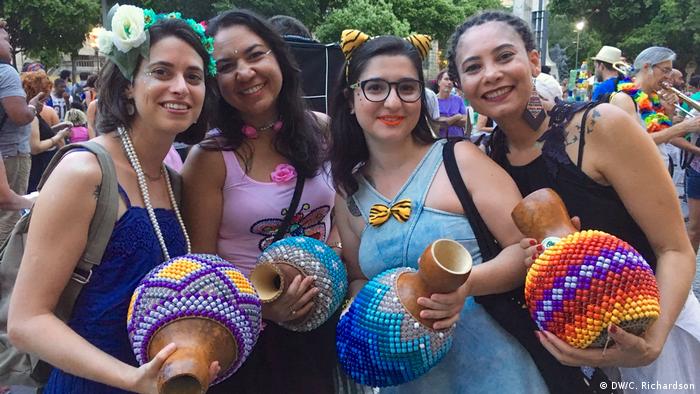 She didn't have a musical bone in her body, but that didn't stop Renata Rodrigues from starting a samba street band in Rio de Janeiro two years ago. When the 40-year old saw a viral Facebook post showing a man with a sign reading, "I don't deserve women who get around," she ironized the message by founding a feminist Carnival block called the Mulheres Rodadas, or "Women Who Get Around" - a double entendre describing how the band leads packs of revelers dancing for miles across the city during the annual festivities.

The block was meant as a joke between a few friends, but Rodrigues says nearly a hundred people turned up for their first rehearsal. Now they have thousands of followers.

This year, the Mulheres Rodadas are preparing for their second Carnival by promoting a campaign to raise awareness of sexual harassment using the hashtag #CarnavalSemAssedio, or "Carnival Without Harassment." Rio is notorious for its sexually liberal attitudes, which reach their apex during the street parades of Carnival. Strangers locking lips in the streets is part of the tradition. But the free-for-all environment also opens the door to rampant sexual harassment. Women are groped, restrained by their hair or arms, and forcibly kissed against their will. 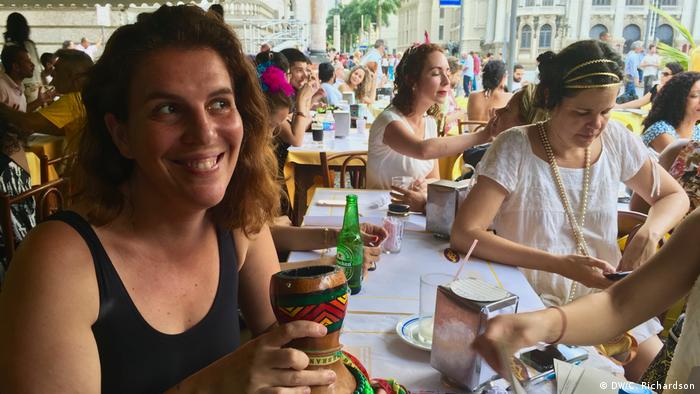 "During parties where people are on the streets, like Carnival, people are more vulnerable to harassment and rape," Rodrigues says.

But Brazilians have little sympathy for the problem. A 2016 survey by the Sao Paulo-based research firm Data Popular showed 61 percent of men think single women attending Carnival should not complain about sexual harassment, and 49 percent agreed a Carnival block was no place for a decent woman.

"Carnival without Harassment" aims to raise awareness that both parties involved in uninhibited Carnival celebrations must agree to sexual contact. The Mulheres Rodadas hope that by educating members of other blocks that no means no, they can teach partygoers how to protect themselves and handle cases of harassment.

The idea that Carnival serves as a great equalizer by bringing people together regardless of gender, race or class also masks deeply-entrenched sexism and racism. Images of lascivious black woman wearing nothing but feathers and sequins are broadcast around the world. In Brazilian homes, the hyper-sexualization of black women is embodied by a woman chosen annually to be the Globeleza - a portmanteau of "Globo," the Brazilian broadcaster that sponsors the contest, and "beleza," the Portuguese word for beauty. She is always a naked black woman painted with glitter. During Carnival season, the Globeleza appears writhing on TV during commercial breaks, complete with close-up crotch shots. 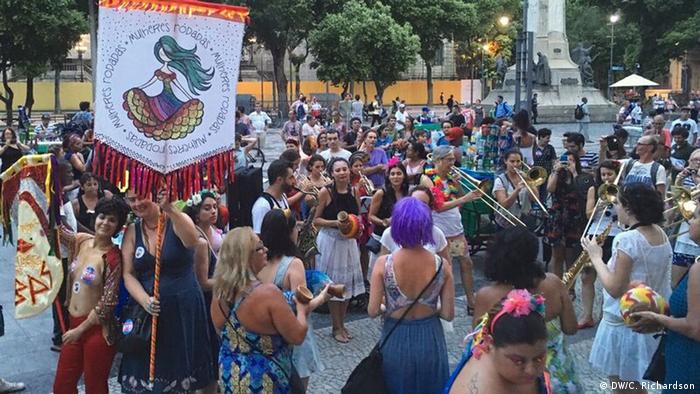 One rape every 11 minutes

The problem goes much deeper than harassment and much further than Carnival; Brazil has shocking rates of sexual violence. According to a public safety report from 2014, one person is raped every 11 minutes in Brazil, and the real number including unreported cases is likely much higher. The country also has one of the highest rates of homicide against women in the world. Even though murders of white women have been declining, the number reported for black women has shot up.

Analba Brazao, an activist from the Recife-based feminist organization SOS Corpo, is a self-described fan of Carnival. Yet she says violence against women is amplified during the street events.

"Women in Brazil don't have the freedom to be on the street. It leaves women exposed," she says. "Our fight is to have the right to be out in the public and have security."

Twenty-nine-year old Daiane Monteiro was enjoying a drink at a cafe when the Mulheres Rodadas streamed past on their way to a Friday evening performance a few weeks before the official start of Carnival. Monteiro, who plays a bell instrument called the agogo in one of Rio's most traditional samba schools, liked the idea of the group, but says she doesn't think sexual harassment is such a big a problem in Rio de Janeiro anymore. She points to women's increasing inclusion in traditional male roles in Carnival - such as playing heavy instruments like the surdo bass drums - as a positive development.

"As women we have the freedom to show our bodies if we want," Monteiro said. "Now we can even play in the samba schools. In the past it was more of a men's activity."

However Rodrigues thinks it's not enough for women just to take on new roles as musicians.

"Women are everywhere inside the blocks and samba schools, but they don't become music teachers, they don't conduct the bands, and they don't make decisions," she says.

Thirty-six-year-old Raquel Fialho will play the xequere, a hollowed gourd covered in colorful beads, with the Mulheres Rodadas at Carnival for the first time this year. She's been practicing with the group since she saw their debut in 2016.

"I saw them last year and I was enchanted," Fialho says. "It was so strong and beautiful and colorful." Fialho knows Carnival's traditions have decades of history, and shifting attitudes will be a long process.

"We can't expect to change ideas in just a few years," she says.

Many in Brazil also fear that hard-won rights for women are at risk under President Michel Temer, who leads Brazil's most conservative administration since the end of its military dictatorship. When Temer announced his first cabinet after taking over as interim president following Dilma Rousseff's suspension from office, it featured no women at all. He also abolished the ministry of women, racial equality and human rights and moved its responsibilities to the ministry of justice.

Rodrigues says the Mulheres Rodadas and their anti-harassment campaign are needed now more than ever.

"Our group started as a joke, but it's actually very serious," Rodrigues said. "Carnival is maybe the most important demonstration in Brazil."

Clare Richardson reported from Brazil with a fellowship from theInternational Reporting Project (IRP).

Managers and politicians behind bars, and record fines: Brazil's judiciary is cleaning house in the Odebrecht scandal. Attorneys general from 15 countries have met for an international anti-corruption summit. (19.02.2017)