Rebuilding efforts lag one year after Nepal earthquake | Asia | An in-depth look at news from across the continent | DW | 25.04.2016

One year after the devastating earthquake in Nepal, the worst-hit regions are still very far from normality. Reconstruction efforts are slow and people feel abandoned. Stefan Nestler reports from the earthquake zone. 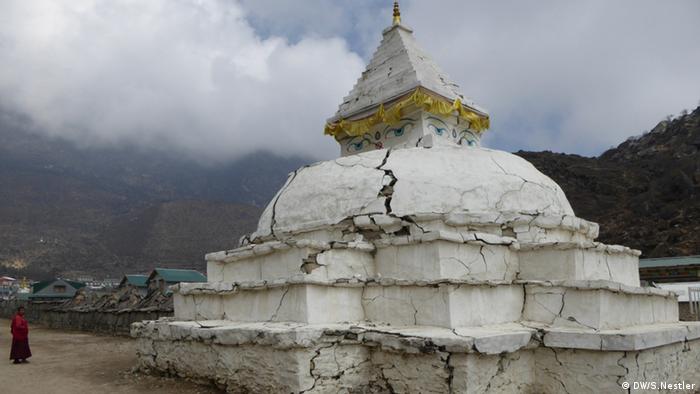 "We lost all of our dreams," Punya Gajurel says sadly. The manager of the school in the Nepalese village of Mailchaur has invited me up to his office on the second floor. Strictly speaking, no one is allowed up here: the government closed the school after the 7.9 magnitude earthquake on April 25, 2015. A red flag on the external wall announces that the building is a prohibited area.

"We have to have somewhere to keep working," says Gajurel, almost defiantly. "This is the only room we have left." He seems to be able to ignore the fact that directly beneath this spot, two floors down, the earthquake-damaged walls sag like rubber beneath the weight of the upper stories, looking as if they might collapse at any moment. 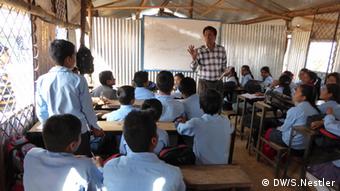 Classes are no longer taught in the building. The school was financed by the German aid organization Nepalhilfe Beilngries and inaugurated in 2013; only three years later, it's fit for the wrecking ball.

For the past year the Mailchaur schoolchildren, around 400 of them, have been studying in provisional classrooms with bamboo walls and corrugated iron roofs - like almost all the children and young people in Sindhupalchowk District. Nepalhilfe Beilngries has built around 20 schools in the area over the past two decades.

The earthquake hit especially hard in this district, which is around 70 kilometers (43 miles) east of the Nepalese capital, Kathmandu. More than 3,500 of the 9,000 recorded deaths linked to the earthquake were in Sindhupalchowk. Between 80 and 90 percent of the houses collapsed here, in the villages of this mountainous region.

The majority of people in Sindhupalchowk are still living in makeshift huts. "Infectious diseases, vomiting or diarrhea spread quickly because there are a lot of people in the emergency shelters, living in very close proximity," says Sabina Parachuli.

The 25-year-old doctor works in the hospital in the district capital, Chautara, which is now just a tent clinic. The old building was so badly damaged in the earthquake that it is in need of extensive repair before it can be reopened.

The people of Sindhupalchowk have had enough of waiting for help from Kathmandu. Twelve months have passed since the devastating earthquake, and almost nothing has been done.

The main street of Chautara still looks as if the shaking has only just stopped, and there certainly hasn't been any determined effort at reconstruction. Locals complain about the lethargic government. 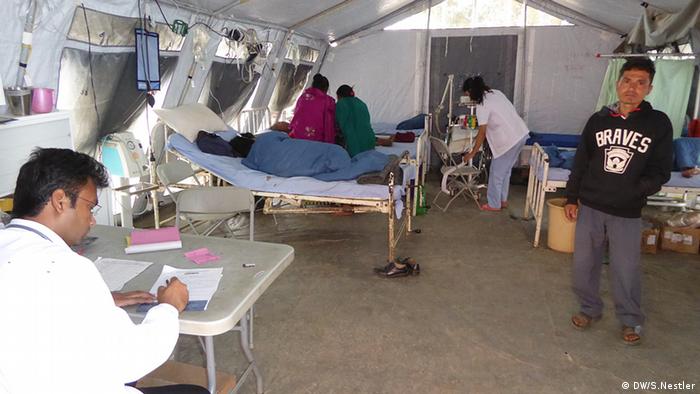 "They really ought to help us as quickly as possible," says Parachuli. "But the government just focuses on politics, politics, politics, instead of tackling what needs doing." As a result, she says, aid is very slow in coming, and there has been almost no progress.

"We're not placing our hopes in the government any more. We're just trying to do the best we can ourselves."

The situation was further exacerbated in the winter months by the effects of a blockade at the Indian border, as the Madhesi ethnic minority protested against a new national constitution. Nothing could be imported from the neighboring country. A liter of gas suddenly cost 500 rupees - around 5 euros/$4.60. There was a shortage not only of fuel but also of medicine, food and construction materials. Aid for the earthquake zone ground to a halt.

Nepal is holding memorial services to mark the anniversary of a devastating earthquake that killed thousands of people. One year on, the government is facing mounting criticism for the sluggish pace of reconstruction. (24.04.2016)

India and Nepal have signed accords which grant millions in aid to help rebuild earthquake-ravaged Nepal. The agreements seek to not only repair infrastructure but also to fix relations between the two countries. (20.02.2016)

Unrest over a new constitution in Nepal has put millions of children at risk of disease, the UN children's agency warns. Protesting ethnic Madhesi groups have blockaded trucks from entering the country from India. (30.11.2015)

The blockade at the border has since been lifted, but the situation is still difficult. Parachuli and her colleagues at Chautara hospital have their work cut out for them.

"We are still dealing with serious medical problems here," she reports. "Those who were injured back then still haven't fully recovered; they have problems, especially with limbs.

"They were operated on back then, and are still not in a position to live a normal life. They were often the only ones who provided an income for their families. Now they earn nothing. And their families are busy looking after them."

Many people in Sindhupalchowk suffer from post-traumatic stress disorder, she adds. "They're afraid of every little thing; they have sleep and eating disorders."

Some of them, she says, are extremely depressed, because they lost family members, their house, or all of their possessions in the earthquake.

However, she estimates that only about 30 to 40 percent of those suffering from mental illness will even come to the hospital.

"In our village communities, mental illness carries a stigma," she says. "People who are mentally ill are often discriminated against."

The children in Sindhupalchowk were initially in shock, too. "Before the earthquake I was looking into smiling, happy children's faces; afterwards, into sad ones. They even stopped talking to one another," remembers Shailaja Kasaju. 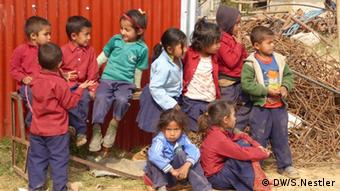 Children were traumatized by the initial earthquake and many aftershocks

The 27-year-old English teacher had only started teaching two weeks earlier, in the school in the village of Sangachok, when the earthquake hit. She says the children were so traumatized that they would often jump out of the windows of the makeshift schoolrooms when they felt the first aftershocks.

Now, says Kasaju, they've grown accustomed to the situation. "They know all about earthquakes and know what they can do for their own safety," she says.

Since the big earthquake one year ago, more than 400 aftershocks of magnitude 4 and over have been registered - and still they keep coming. It will be a long time before normality returns to the district of Sindhupalchowk.

DW journalist Stefan Nestler, the author of this report, started the aid project School Up! following the earthquake in Nepal. Donations will be put toward rebuilding the school in Thulo Sirubari in the district of Sindhupalchowk. On his blog he reports on the project's progress.