The Pope has used his traditional Urbi et Orbi speech to call for peace in Jerusalem. It was the second time the pontiff has spoken about the issue since the US recognized Jerusalem as Israel's capital. 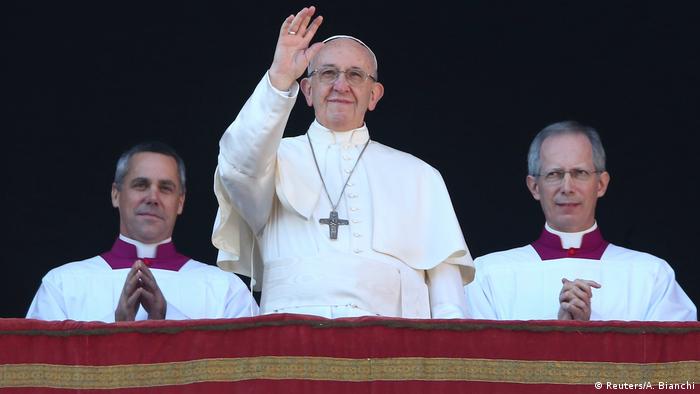 Pope Francis called for a "negotiated" two-state solution to the Israel-Palestine conflict in his annual Christmas Day address in Rome on Monday.

Tens of thousands of people gathered in the Vatican to listen to the head of the Catholic Church deliver his fifth "Urbi et Orbi" ("to the city and the world") message in which he called for peace in Jerusalem.

"We see Jesus in the children of the Middle East who continue to suffer because of growing tensions between Israelis and Palestinians," he said. "Let us pray that the will to resume dialogue may prevail between the parties and that a negotiated solution can finally be reached, one that would allow the peaceful coexistence of two states within mutually agreed and internationally recognized borders."

It was the second time the Argentine pontiff, born Jorge Mario Bergoglio, has spoken out publicly about Jerusalem since US President Trump stoked regional tensions by recognizing Jerusalem as the capital of Israel.

Francis warned the assembled faithful that "the winds of war are blowing in our world and an outdated model of development continues to produce human, societal and environmental decline."

He also raised the plight of the Rohingya Muslim minority in Myanmar and Bangladesh, two countries he visited four weeks ago.

"It is my hope that the international community will not cease to work to ensure that the dignity of the minority groups present in the region is adequately protected," he said.

Popes usually deliver the Urbi et Orbi at Christmas and Easter. The address also offers a pardon for sins, which is valid for anyone who follows the speech in person or remotely.

About 50,000 people gathered in St Peter's Square for this year's message, according to the Vatican.