Police: Chemnitz explosives suspect had contact with ′Islamic State′ | Germany | News and in-depth reporting from Berlin and beyond | DW | 10.10.2016

German police in the city of Leipzig have detained a Syrian man wanted for questioning over explosive material discovered in his apartment in Chemnitz. The arrest ends a two-day manhunt seeking the 22-year-old refugee. 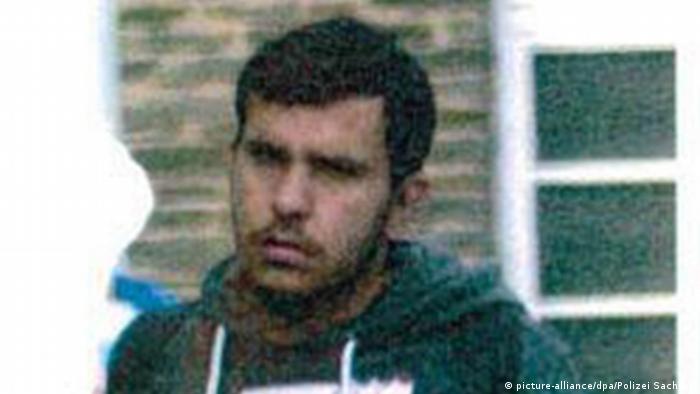 German police in Saxony said on Monday that 22-year-old Jaber A., arrested on Sunday night in the eastern German city of Leipzig, had ties to the "Islamic State" terrorist organization - though they declined to go into detail.

Speaking at a press conference in Dresden alongside Saxony's Interior Minister Markus Ulbig, state police chief Jörg Michaelis said that Jaber A.'s behavior had suggested an "IS context," and that he had been planning a bombing in Germany.

Earlier in the day, Saxon state police confirmed via Facebook that Syrians living in Leipzig had told them that they had apprehended the suspect in an apartment north of the city center. The Facebook post added that police were "very consciously" not giving any more details of the circumstances of the arrest, "because we do not want to provoke any dangers for those persons who gave us the tip." 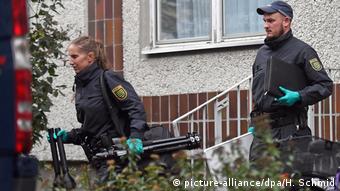 Michaelis said in the press conference on Monday that a Syrian man walked into a police station with a photo of Jaber A. on his phone, saying that he and his roommates had caught him. Police then arrived in the apartment to find the suspect tied up.

The suspect was taken to a police station and identified as Jaber A., and is currently being arraigned and questioned.

At Monday's regular government press conference in Berlin, spokeswoman Ulrike Demmer said that Chancellor Angela Merkel thanked both the Syrian who had helped apprehend the suspect as well as the security forces. Merkel is currently in Niger, the second leg of her official tour of three African countries.

Two apartments were raided in Chemnitz during a massive police operation on Sunday, and three other suspects were held for questioning. Two of these have since been released, though one - a 33-year-old Syrian believed to be the man who rented out the Chemnitz apartment to Jaber A. - is still being held on suspicion of helping the suspect. Both suspects currently in custody had arrived in Germany in the past two years and had submitted asylum applications.

Acting on a tip-off from Germany's domestic intelligence agency, police had raided the suspect's Chemnitz apartment on Saturday and seized several hundred grams of explosive material, which was later detonated in a controlled explosion.

Experts are now trying to determine whether the explosives they found in the apartment were the same ones used in the deadly November 13 attacks in Paris and the March 22 attacks in Brussels. It was not immediately clear what the Syrian refugee was doing with the explosives. Speculation has been rife in the German media, but so far police have refused to comment.

Police have only said that the man was originally from the Damascus area of Syria and had been granted refugee status after arriving in Germany last year.

How Jaber A. was able to evade police on Saturday was a key question of the Monday conference. He was at home when police approached his Chemnitz apartment at about 7 a.m. local time (0500 UTC).

Michaelis said that police were not sure in which apartment in the building the suspect was hiding, and had to break off a planned raid, since there was a danger to other residents.

During this retreat, a man matching the suspect's description emerged from the building, and fled when police called on him to stop, Michaelis said. He could not confirm whether the fleeing man was Jaber A.

During the search, German police boosted security around the country, particularly around "critical infrastructure" like train stations and airports. 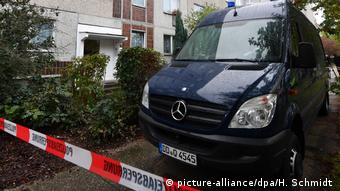 The Christian Social Union (CSU), the Bavarian wing of Merkel's center-right government coalition, said that Germany's Federal Office for Migration and Refugees (BAMF) needed to introduce a "total revision" of the registration of asylum seekers.

CSU General Secretary Andreas Scheuer said the BAMF needed to conduct individual interviews with all refugees, "because we must know who is coming to us, and who is staying with us."

In fact, a BAMF spokeswoman told DW that although individual interviews had been replaced with multiple-choice questionnaires during the height of the bureaucratic crisis caused by last year's influx of refugees, the authority currently carries out interviews with anyone applying for asylum in Germany.

Even during the crisis, she added, individual interviews were carried out in all cases where a refugee's identity could not be established.

The BAMF said on Monday that it would report all forged passports directly to the police in the future. Up until now, it had merely reported the matter to the relevant regional authority.

Authorities have detained a man in connection to a Syrian refugee suspected of planning a bombing attack in Germany. Police discovered "several hundred grams" of explosive materials at the suspect's residence. (09.10.2016)

Police continue a nationwide hunt for a man suspected of plotting a bomb attack. The suspect has been on the run since police stormed his flat in Chemnitz on Saturday. Naomi Conrad reports from the East German town. (09.10.2016)

Police have found explosives in an apartment in the German city of Chemnitz and arrested three people over an alleged terror plot. The main suspect, 22-year-old Syrian Jaber A., is still on the run. (08.10.2016)