Poland's prime minister has told the EU it has no business meddling in the country's internal affairs. The eastern European country has come under pressure from the EU over controversial judicial and media reforms. 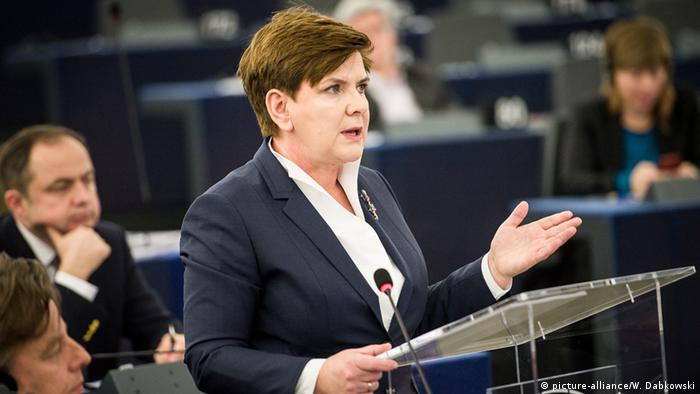 Polish Prime Minister Beata Szydlo defended her government's reforms of the constitutional court and media, which the EU executive is investigating for breaking standards of the rule of law, in a debate of the EU parliament on Tuesday.

Since coming to power in November, the Law and Justice party (PiS) has pushed through a judicial package and media law that opponents argue tramples on the rule of law and represents a power grab by the conservative, populist party.

Relations between Warsaw and Brussels are at a low point, with the European Commission (EC) last week launching a probe into whether the new laws violate fundamental EU principles.

The tussle comes at a sensitive time as the EU struggles to form a united response to a migrant crisis while Poland and other Central European states form an anti-migrant bloc.

Szydlo told European lawmakers that Poland is built on "freedom, equality, justice and sovereignty" and that changes to the law "reflect EU standards and in no way differ from standards in other EU states."

"Poland doesn't deserve to be monitored," Szydlo said, adding that her country was "hurt" by the "unjust" treatment.

"We are a sovereign state; we are a free nation," she added. "Polish problems have to be discussed and solved in Poland, because whenever third parties tried to solve our problems for us, that was disastrous."

EU executive worries of 'systemic threat" to rule of law

Opponents of the judicial changes argue it will paralyze the country's top court and remove checks and balances on the PiS' conservative platform.

European Commission Vice President Frans Timmermans, who is leading the investigation into Poland, said on Tuesday that all these reforms appear "to render the functioning the Constitutional Tribunal considerably more difficult" and there is a risk of the "emergence of a systemic threat to the rule of law."

Timmermans said the main reason for the investigation was the way in which the PiS replaced five judges appointed by the previous government, and then ignored a constitutional court ruling that some of its appointments were illegal.

EU President Donald Tusk, a former Polish prime minister, criticized the inquiry on Monday, saying after talks with country's president Andrzej Duda that there are other ways of proceeding instead of conducting an investigation. The inquiry could lead to punitive actions against Poland.

The Polish premier said the constitutional court reforms were necessary to fix unconstitutional decisions of the previous government, noting that it was a domestic political issue of no concern to the EU.

The media law granting PiS greater control over top appointments to public television and radio stations were intended to make them "truly public broadcasters," Szydlo said, defending what the opposition says is an effort to control information.

"No legal standards have been breached, and the objective is objectivity in reporting," the premier said.

Concern over the judicial and media laws have spilled over into relations with Poland's neighbor Germany, whose ambassador was summoned last week to the foreign ministry in Warsaw over comments made against Poland by German and European politicians.

German Foreign Minister Frank-Walter Steinmeier said Tuesday he would visit Poland on Thursday to meet with civil society groups and the government in an effort smooth over tensions.

"Of course there is no relationship (that Germany has) with another country that is more sensitive and burdened by history than with Poland," Steinmeier told reporters. "That does not mean that we cannot speak about the things that concern us. But it can influence the way we do it."

Poland's opposition to taking migrants has also raised tension with Germany, which is pushing a scheme to develop a common European response and distribute refugees across all EU member states.