Painting, politics and provocation are among this week’s topics on “Talking Germany” with our guest, German artist Norbert Bisky. 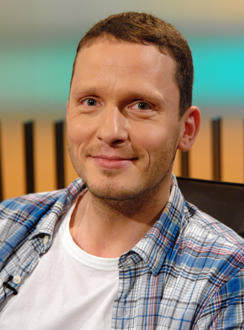 Norbert Bisky is one of Germany’s most internationally acclaimed and sought-after contemporary painters. Born in Leipzig in 1970, he is the son of Lothar Bisky, a well-known politician from the Left Party.

The artist’s early work reflects the years he spent growing up in the communist East Germany, grappling with imagery from the totalitarian system of communism. Meanwhile, his works fetch high prices on the global art market.

His often large-scale, brightly colored works depict a cosmos full of violence. His most recent series is titled "Colaba" and deals with terror attacks in Mumbai on the November 2008. Norbert Bisky happened to be in Mumbai at the time preparing for an exhibition, and witnessed the attacks firsthand. Bisky later elaborated his impressions and his experiences in Mumbai on canvas, creating a small, penetrating series on the banality of evil.

Norbert Bisky came from a family that firmly believed in communism and by his own account, was also raised as a communist. His father was director of the Konrad Wolf film academy in Potsdam in East Germany and later the longstanding chair of the Party of Democratic Socialism. His mother, cultural sociologist Almuth Bisky, was a high-ranking culture official in East Germany and is widely reported to have worked for the secret police.

The Fall of the Wall: "The Zero Hour"

When the Berlin Wall fell, Bisky had just finished his school-leaving exams and the completion of his national service in East Germany’s National People’s Army. The days of rebelling against his parents were over: History had done it for him.

The fall of the Wall was the "zero hour" for Bisky, too – a new beginning. Overnight, his plans for a life in East Germany were rendered obsolete. In this period of general uncertainty, he opted not to follow the well-meaning words of advice of many of his contemporaries. At 23, he chose art over law or business school, the "steady" life. Like many East Germans, he took advantage of his new freedoms after German reunification by traveling the world.

Art as a Calling

In 1993, he attended art school in Berlin. From 1994 until 1999, he studied painting at the Berlin University of the Arts in the class of the leading artist Georg Baselitz, completing his studies with distinction in 1999. Yet as the only student from the former East Germany, Bisky felt like an outsider there – in an artistic sense as well. His paintings, touching on heroic and totalitarian themes, polarized the public from the outset. Still, it struck a collective nerve. His professors considered his work to be quite provocative, particularly his penchant for painting blonde-haired, blue-eyed boys in athletic form. Bisky’s paintings are reminiscent of the communist propaganda used by the East German regime. By his own account, Bisky’s work reflects his personal biography as an East German, as well as the "cultural trash of Russia’s East German colony." In loud colors, the artist conjured up cliches, such as the pioneering spirit, friendship, discipline, happiness and defensiveness. His ironic take on state-supported art in East Germany made heavy use of the dictatorial society – the "perfect world" mentality – as theme. Critics accused him of whitewashing the horrors of East Germany, of a cynical attempt to make light of the communist regime.

Gallery owners and collectors first began noticing Bisky’s work during a group exhibition at his university. Launching his brilliant career were a pair of initial successes, the art exhibition "Art Cologne" in the fall of 2000 and his first solo exhibition in Berlin in 2001. Until then, Bisky had to work night shifts in retirement homes, pass out flyers or tend bar to stay afloat financially. Yet he said all of these experiences helped him with his art.

Bisky was hardly prepared for the spike in demand for his work, large-scale oil paintings that have a watercolor quality. His main works go for up to 60,000 euros a piece. Throughout his career, he has followed art history’s traditional trajectory: Art, in his opinion, acts to call things into question. Meanwhile, the artist has opened exhibitions around the world, from New York to Madrid and from South Korea to Israel. Today, the 38-year-old is considered one of Germany’s most important contemporary painters.

And he’s passing his craft on to future generations: as an art professor in Geneva.

As Bisky’s career as an artist took off, he had to contend with tremendous personal challenges. In 2008, his younger brother died. And during preparations for an exhibition in Mumbai, Bisky and gallery owner Andreas Osarek narrowly escaped the terror attacks on the Taj Mahal Palace hotel. Meanwhile, the artist is putting these twists of fate to work. In his most recent series of paintings, titled "Colaba" after the Mumbai district of the same name, Bisky draws on the horror of his first-hand experience with the attacks.