Three states will vote in March. No party is currently leading. But one side is already patting itself on the back. And the others are getting increasingly nervous. That's not a good sign, DW's Marcel Fürstenau writes. 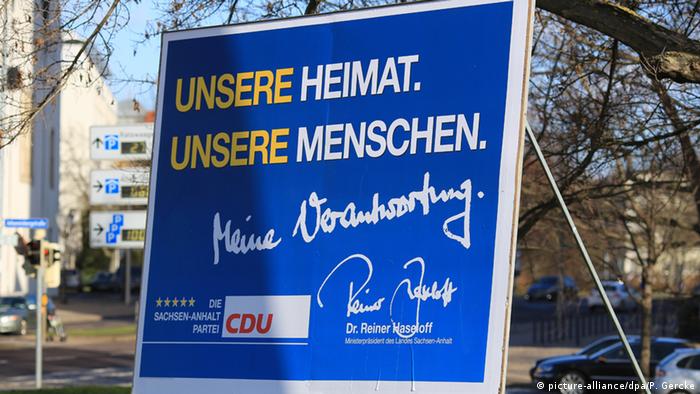 Germans are used to hearing Horst Seehofer attack Chancellor Angela Merkel. The Bavarian state premier and head of the Christian Social Union (CSU), the sibling party of the chancellor's Christian Democrats (CDU), might have the right idea when he criticizes Merkel on issues such as her refugee policy. Often, though, he adopts the wrong tone - and seems to enjoy doing that.

Bavaria is not electing a new state parliament on March 13; Baden-Württemberg, Rheinland-Pfalz and Sachsen-Anhalt are. So, there's no urgent need for Seehofer to raise his own profile at the expense of Merkel and her CDU. From this point of view, there is something irrational about the CSU leader's behavior toward the chancellor, something almost willfully damaging to the party.

The CSU does not exist in the states that will be voting in just under four weeks. So anyone agreeing with Seehofer's stance would have to vote for the Alternative for Germany (AfD) party. Founded just three years ago, the party campaigned in previous elections with the slogan "Immigration needs clear rules." That was before hundreds of thousands of refugees had arrived in Germany. Now, Frauke Petry and Beatrix von Storch, the leaders of the AfD, say they can even imagine guns being fired at the border. That would certainly bring us a bit closer to an unjust state.

The weaponized rhetoric is an alarming indication of how edgy, possibly irreconcilable, sometimes even inflammatory the mood in Germany has become. All the opinion polls say that the only party that will have cause to celebrate after the elections on March 13 is the AfD, because it will gain its first seats in the regional state parliaments in Stuttgart, Mainz and Magdeburg - probably with double-digit results. All the other parties fear losing their grip on power, or even their state parliament representation.

The market-friendly Free Democrats (FDP), who in 2013 failed for the first time to gain enough votes to enter the Bundestag, may fall below the 5 percent hurdle in these three elections, too. The fact that they are, nonetheless, not succumbing to the temptation to chase votes by adopting a harsher tone against refugees makes them a pleasant contrast to their political rivals. The same is true of the Left party, which will probably have to bury its hopes of winning a second state premiership. The rise of the AfD is likely to prevent the formation of an alliance of the Social Democrats (SPD), Left and Greens like the one in the state of Thuringia.

Even if the numbers were to allow this, the SPD would still require convincing. It is doubtful that the establishment party would be prepared to subordinate itself to the Left a second time and agree to be the junior partner in a coalition. The SPD would probably rather team up with the CDU, even if for months now there has been an embarrassing competition between the SPD and Merkel's party for the most implausible refugee policy. The CDU is currently slightly ahead in this regard, with its demand, now slightly watered-down, that refugees should not be paid the minimum wage.

The Greens are also doing things in style. In an interview with Spiegel magazine, Boris Palmer, mayor of the university town of Tübingen, blustered that now was no time for "Pippi Longstocking or bed-of-roses politics." This may sound amusing but, in the final stretch of an election campaign, it's anything but a coolheaded expression. Perhaps, in the medium term, the 43-year-old dreams of inheriting the leadership of the government of Baden-Württemberg from his party colleague, Winfried Kretschmann. The 67-year-old became Germany's first Green state premier in 2011.

Palmer has made other comments about refugees that are astonishing for a Green. For example, he said life in Iraq and Afghanistan was "hard and also, by our standards, hazardous." There were, however, he said, "large areas" in Iraq "that are not ruled by 'Islamic State'" and that, according to the Geneva Convention, displaced people must initially flee to areas like these. The AfD should thank Palmer for giving its campaign a boost. The right-wing populists couldn't have put it more cynically themselves. On March 13 we will see the result. The AfD already has the champagne on ice.

Opinion: China's Communist Party's hubris could be its downfall 21h ago