Authorities in Kathmandu have issued the country’s first passport to a person of a third gender. Despite progressive gender laws, transgendered individuals still face discrimination. 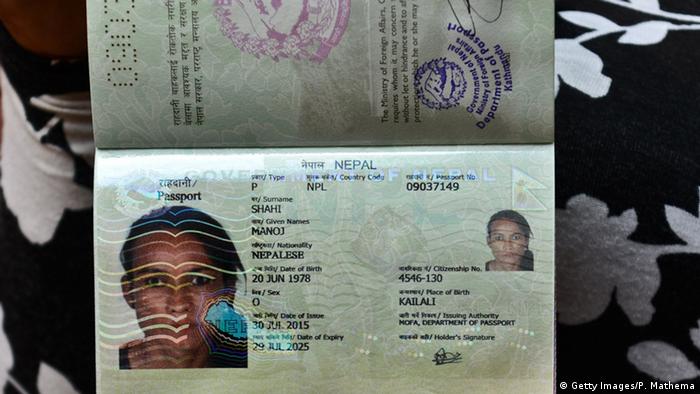 Nepal issued its first passport to a transgendered person, officials said on Monday, in what human rights group hailed as a breakthrough for gender rights.

The travel documents now show the gender as "O" signifying "other", instead of "male" or "female". The 37-year-old activist Monica Shahi was the first to receive this passport from the Foreign Ministry.

"I cannot describe my happiness today. My country has recognized and respected my identity," Shahi told AFP.

"My struggle was not just for myself, but for future generations. Now everyone like me can get this service."

Transgender people have had the right to choose a third gender category for other citizenship documents since January 2013. The Supreme Court ruled that the government apply the same measures for passports five months ago.

"This recognition in the passport is the result of a long struggle and today we are proud that our country has taken this step," said Pinky Gurung, president of Blue Diamond Society, an LGBTI rights group, told AFP.

"I am sure there are many gender and sexual minorities who will benefit from this positive development," Sunil Babu Panta told the DPA news agency by email.

Nepal is recognized for having some of the most progressive gender and homosexuality laws in South Asia.

Transgender people continue to face discrimination in Nepal, including difficulties having their gender identity legally recognized in bureaucratic procedures.

"This is not about me, but about the world," said Shahi. "This is about identity."

It not known how neighboring countries will react to the third-gender category when passport holders travel abroad.

"We need to see how this will be accepted internationally," said Manisha Dhakal, a transgender and a member of Blue Diamond Society, told DPA.

Gaining official status for third gender individuals is only the first of many equal rights LGBTI groups are hoping to gain after Monday's events.

"We would now like to request the government to legalize same-sex marriage," said Shahi.

Other countries such as Australia and New Zealand also issue third-gender passports. Individuals who identify as neither male nor female can opt to use an "X" for their gender, instead of "M" and "F."

Nearly one year after the Supreme Court's landmark decision on transgender people in India, the country still faces problems enforcing the ruling. DW spoke with Jayshree Bajoria about the state of these rights reforms. (10.02.2015)