Myanmar President Htin Kyaw has announced his surprise resignation following reports of ill health. He is a close ally of de-facto leader Aung San Suu Kyi, who is constitutionally barred from the presidency. 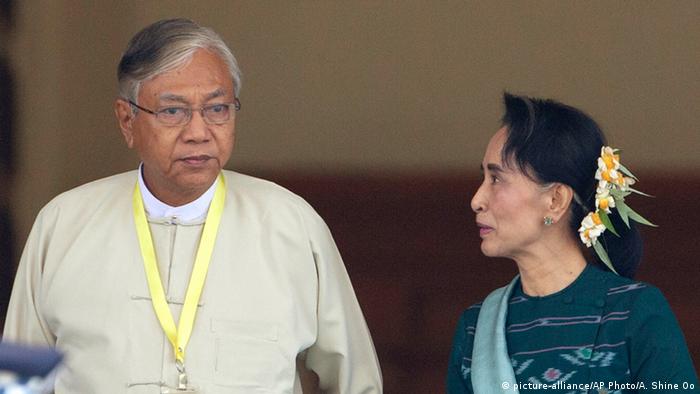 Myanmar President Htin Kyaw resigned on Wednesday, according to a statement from his office which did not provide details, and only said the leader wished to "take a rest from his current duty."

Parliament must now elect a new president within seven days, as directed by the constitution of Myanmar. In the interim, Vice President Myint Swe, a former general, will take over the presidency until the new leader is chosen.

In 2016, 71-year-old Kyaw became the first civilian president in more than five decades to be elected through free and fair elections and without ties to the military.

A friend of Suu Kyi

Kyaw is widely respected in Myanmar and is an ally of de-facto leader Aung San Suu Kyi, whose charitable foundation he helped run prior to becoming president.

Suu Kyi holds the title of state counselor of Myanmar, a position created for Suu Kyi following the 2016 election, as she is constitutionally barred from serving as president.

In Myanmar, the president is the head of state and government, and has far-reaching powers under the constitution.

But Kyaw's role was more ceremonial due to Suu Kyi becoming the country's de-facto leader in April 2016.

There has been some speculation about the state of President Htin Kyaw's health, with reports suggesting that he underwent surgery in 2016, and was still receiving treatment in Bangkok.

Southeast Asian leaders are gathering for the first ASEAN summit in Australia. But rights groups are calling on Canberra to talk about more than just economics at the Sydney meeting. (16.03.2018)