A summit of Islamic nations has issued a unified response to counter the US recognition of Jerusalem as Israel's capital. Israeli Prime Minister Benjamin Netanyahu said he was "not impressed" by the declaration.

A final communique, agreed by delegates from all 57 members from the Organization of Islamic Cooperation (OIC) on Wednesday, called on "all countries to recognize the State of Palestine and East Jerusalem as its occupied capital."

Muslim leaders "rejected and condemned" Trump's Jerusalem announcement, saying in the declaration that they considered it to be "null and void legally." They also invited the US president to rescind the "unlawful decision that might trigger chaos in the region."

Trump's announcement was "a deliberate undermining of all peace efforts" that would give impetus to "extremism and terrorism," the declaration said.

The White House said it is still committed to reaching peace in the Middle East, and will remain "hard at work putting together our plan, which will benefit the Israeli and Palestinian peoples."

But Erdogan told delegates that Trump's actions meant the US could no longer be an unbiased broker.

"We are not impressed by all these statements," he said in a speech. "It is better for the Palestinians to recognize reality and act for peace, not for radicalization, and to recognize another fact about Jerusalem: not only is it the capital of Israel, we also maintain respect in Jerusalem for the freedom of worship for all religions."

Jerusalem's status remains one of the core issues of the decades-long Israeli-Palestinian conflict. Israel captured the predominantly Arab eastern part of the holy city during the 1967 Middle East war. Its claim to the entire city, which it sees as the ancient capital of the Jewish people, was never internationally recognized. Trump reversed that policy last week. 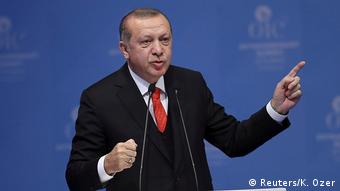 The US president's decision on Jerusalem provoked worldwide condemnation from leaders, Arab and otherwise, and sparked violent protests across the Middle East, particularly in the Israeli-occupied territories Gaza and the West Bank. The Palestinians also lay claim to Jerusalem and have repeatedly insisted during peace negotiations that the eastern part of the city be the capital of their future state.

Speaking at the summit on Wednesday, Erdogan told delegates: "With this decision [by the US to recognize Jerusalem as the Israeli capital], Israel, which is responsible for occupation, blockade, unlawful settlements, home demolitions, evictions, land asset appropriations, disproportionate violence and murders, was rewarded for all its terrorist actions."

The Turkish president, who has presented himself as a champion of the Palestinian cause, warned last week that US recognition of Jerusalem would plunge the world "into a fire with no end" and labeled Israel a "terrorist state."

Last week's clashes between Palestinian youths and with Israeli security forces led to two deaths among the protestors.

However, no state has yet announced any concrete measures against the US or Israel.

Palestinian President Mahmoud Abbas told OIC delegates he would ask the United Nations General Assembly to cancel Israel's UN status and seek full membership for Palestine. He added that he would appeal to the Security Council to annul the US move to recognize Jerusalem as Israel's capital, and that his people would refuse any role for the US in future peace talks.

"We do not accept any role of the United States in the political process from now on because it is completely biased towards Israel," Abbas said.

Abbas described Washington's decision as "the greatest crime" that showed it was no longer "fit" to broker talks. Instead, the Palestinian president said he wanted to see the UN taking charge of the peace process and the creation of a new mechanism.

Iran's president, Hassan Rouhani, accused the US of lacking any respect for the Palestinians and their rights to a nation. Arriving at the summit, Rouhani posted on Twitter that Trump's move showed that the US was not "an honest mediator and will never be," adding that Washington wanted only to "secure the interests of the Zionists."

Jordan, which along with Egypt is one of only two Arab nations with diplomatic ties to Israel, stressed that "our region cannot enjoy peace without the two-state solution," referring to the peace mechanism that would see Israelis and Palestinians granted their own separate state.

Turkey, however, faces the monumental task of bridging the Muslim political community, which includes regional rivals Saudi Arabia and Iran.

Many close allies of the United States — including Egypt, Saudi Arabia and the United Arab Emirates — are unlikely to risk souring their relationship with Washington by endorsing an OIC statement condemning Israel.

However, despite not attending the OIC summit, Saudi King Salman echoed calls from Istanbul that eastern Jerusalem be handed back to the Palestinians. Salman reportedly told the kingdom's Consultative Council: "The kingdom has called for a political solution to resolve regional crises, foremost of which is the Palestinian issue and the restoration of the Palestinian people's legitimate rights, including the right to establish their independent state with east Jerusalem as its capital."

The Arab League, Turkey and Jordan have warned the US against moving its embassy to Jerusalem. Donald Trump has mulled recognizing the city as Israel's capital, a historic move that could fuel violence across the region. (04.12.2017)