Frustrated at the bottleneck at the Greek-Macedonian frontier, refugees have tried to rush the border fence. The camp at the border town of Idomeni is over its intended capacity by 5,000 people. 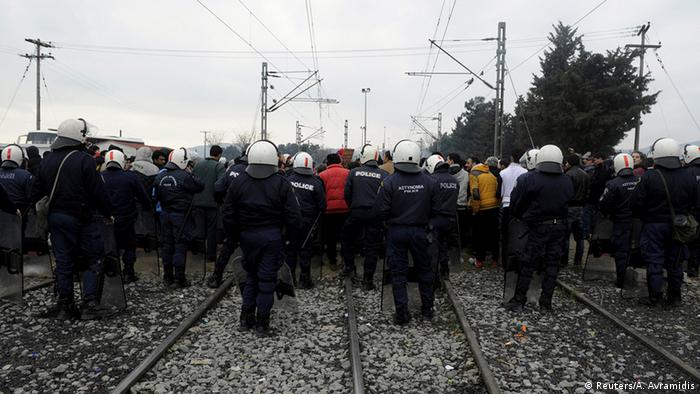 Hundreds of migrants stormed the border fence to Macedonia in the Greek village of Idomeni on Monday morning, local media reported. "Free, free, we can pass," the asylum seekers chanted, spurred by reports that after days of being stranded, Macedonia might open the fence and permit more people to pass through.

The refugee camp in Idomeni has seen an accumulation of some 7,000 people stuck in limbo after Macedonia announced on February 20 that it would only allow a small number of migrants, and only those from Syria and Iraq, each day. On Friday, only 22 people were allowed to pass.

DW reporter Anja Koch was there at the scene.

She reported as the police used teargas to push the crowd back, and then sent in military vehicles to control the crowd.


As more than a million migrants made their way through Greece on their way to the wider European Union last year, the camp in Idomeni was set up as a temporary accommodation facility and is only built to house 2,000 people. The situation created by Macedonia’s decision has seen refugees forced to sleep in the open and wait hours to use the bathroom or receive food and water.

In an interview, Chancellor Angela Merkel called for patience with efforts to accommodate refugees. Merkel said she was not weighing an alternative to her approach toward reducing the number of asylum applicants. (29.02.2016)

Greek PM Alexis Tsipras says he will block all EU refugee decisions if his country has to deal with the crisis alone. His comments come as Austria and West Balkan states decide to tighten their borders against refugees. (24.02.2016)

Suspect, police officer dead in attack at US Capitol 4h ago

Russia warns West against sending troops to back Ukraine 7h ago