International aviation safety organizations warn against flying over the region surrounding the Caspian Sea. Jan-Arwed Richter told DW why that airspace has recently become even riskier. 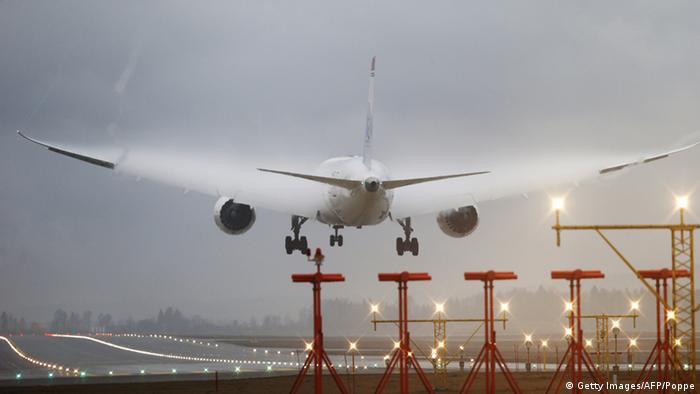 DW: The European Aviation Safety Agency (EASA) and the International Civil Aviation Organization, the UN's air safety agency, have both issued safety alerts concerning air travel over Iraq, Iran and the Caspian Sea. In your opinion, how safe is it for commercial airlines to fly over the Middle East right now?

Jan-Arwed Richter: We have to look at the different Middle East nations separately. Flying over most of the countries in the region is safe. But there's a higher risk for regular passenger airlines in Iraq, Syria, Afghanistan and a couple of neighboring areas. Most airlines already avoid this area anyway, though.

Why is the risk in or over these regions higher?

The situation has recently become more unpredictable, because additional actors, like Russia, have come into the fold. Their military flight movements are not coordinated with civil aviation ground control in the region. 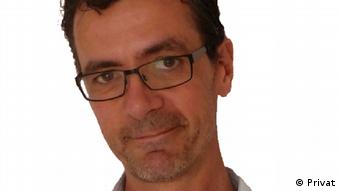 Most units are equipped with surface-to-air missiles. Since we can't eliminate the possibility that these missiles can reach the altitude of commercial airline jets, we have to be careful - especially knowing what happened with MH17 over eastern Ukraine.

Recently, the Russian Navy has also started launching regular missiles and cruise missiles toward Syria from the Caspian Sea, which could pass through civilian airspace. So in general, the security situation over the conflict region has become more volatile.

Are there airlines that are still flying directly over Syria?

I know the local airline Syrianair and the Lebanese MEA (Middle East Airlines) are still flying over Syria. But the US Department of Travel for example warns US citizens not to take airlines that travel through Syrian airspace.

How high do airplanes usually fly and at what height do missiles fly?

Depending on the type and attack profile, some missiles can also reach these heights. But this varies according to the missile launching system and other technical conditions that I can't say much about.

Is the Middle East a busy route for airlines?

The route across the Persian Gulf is the main artery of intercontinental air traffic between Europe and Asia. Hundreds of planes use it every day. Almost all flights traveling from Dubai, Abu Dhabi and Qatar to the EU usually take this route.

Now, after the airspace over southeastern Turkey has been blocked, the situation has changed a bit. Many planes need to make a detour, flying either further north over Iran or further west over Egypt and Saudi Arabia.

Which other world areas would you consider risky right now?

Over at the Jet Airliner Crash Data Evaluation Centre (JACDEC), I made a world map with airline accidents in 2014, which shows where risky areas are: 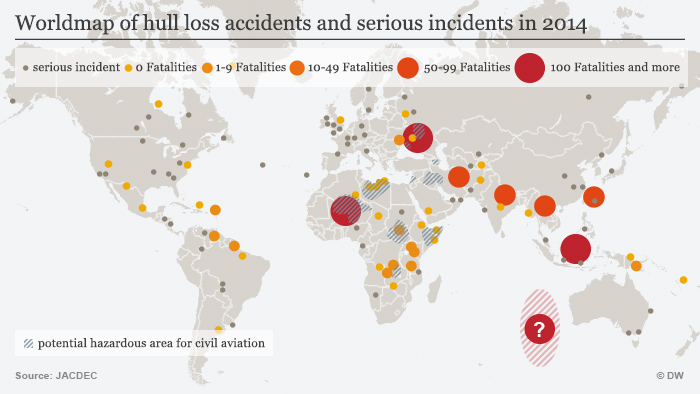 What is your opinion on airlines flying over conflict zones in general?

Airlines don't have the means to analyze the security situation in all areas they fly over. They have to rely on information provided by other institutions. But these institutions' alerts don't prohibit them from flying over certain areas. They usually have more of an informal character. Airspace is fully closed off for very specific reasons only, like military maneuvers or volcanic eruptions.

US, Russia make 'progress' in talks over Syria air safety

The US and Russia have reportedly made 'progress' during discussions about flight operations over Syria. The talks came amid fierce fighting between Russian-backed forces and so-called 'Islamic State' (IS) on the ground. (10.10.2015)

US, Turkey: Most Russian strikes do not target 'IS,' al Qaeda in Syria

The US and Turkey have said that Russian strikes in Syria have mainly targeted moderate rebel groups, not "Islamic State" fighters. Meanwhile, the Syrian regime launched its first ground offensive with Russian help. (08.10.2015)

Several officials have said that Russia did not target the militant group "Islamic State," but instead moderate Syrian rebels. The UK, France and US have demanded proof of Russia's targets. (30.09.2015)

Ukraine: Contact restored with Azovstal defenders amid heavy fighting — as it happened