Amid ongoing tensions with her allies in Bavaria, Angela Merkel has refused their plan to place a cap on incoming aslyum seekers. The proposed upper limit of 200,000 for 2016 was "not the chancellor's position." 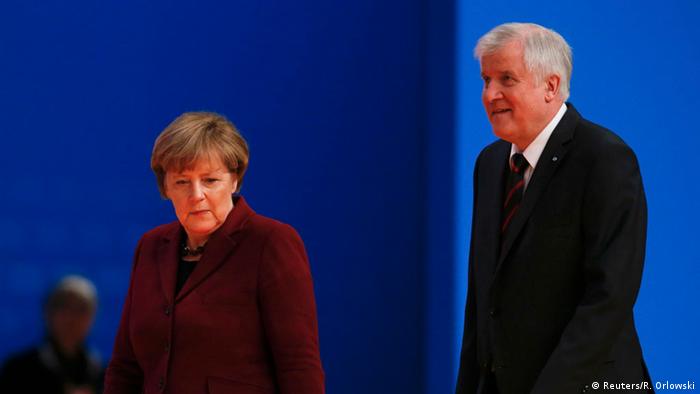 German Chancellor Angela Merkel said on Monday that she did not support a proposal from her Bavarian sister party to cap the number of refugees entering the country in 2016.

"This is not the chancellor's position," Merkel's spokesman Steffen Seibert said on Monday. "We do not believe that a limit on refugee numbers can be achieved by one country acting alone."

The suggestion had come from Horst Seehofer (pictured above with the chancellor in December), leader of Bavaria’s Christian Social Union (CSU), the Bavarian sister party to Merkel's Christian Democrats (CDU). Seehofer, whose state is the first port of call for the majority of migrants reaching Germany, has repeatedly criticized Berlin's summer 2015 decision to open its doors to hundreds of thousands of people.

On Sunday, the head of Bavaria's state government named a figure of 200,000 as the absolute maximum number of refugees Germany should be willing to accept in the coming year.

"Limiting the number of migrants must be the main objective in 2016," Seehofer told the "Bild am Sonntag" newspaper ahead of his party’s annual conference, to be held this week in the resort town of Wildbad Kreuth. Chancellor Merkel and British Prime Minister David Cameron are scheduled to attend the conference.

"This figure (of 200,000) is tolerable and, in that case, integration would also work properly. For me, anything above that is excessive," Seehofer continued.

A problem at the EU level

Merkel scoffed at the idea, saying that the refugee crisis in a Europe-wide problem that requires implementing tougher controls at the 28-member bloc’s outer borders and the redistribution of asylum seekers throughout the member nations.

Any solution must come at the EU level, Merkel's spokesman Seibert added, saying that only then could they create "a situation where illegal migration becomes legal migration and where we reduce the number of new arrivals markedly and sustainably."

Asked whether Merkel might be able to persuade her ally at this week's CSU conference, Seibert refused to commit: "Their positions are well known and the discussion in Kreuth will be an open one, as ever."

Seehofer’s plan was critcized across the political spectrum. Aydan Özoguz, the integration specialist for grand coalition partners the Social Democrats (SPD), called it "unserious and dangerous," to the German press.

The head of the opposition Left party, Bernd Riexinger, went even farther – accusing Seehofer of trying to "consolidate his claim to leadership through the usual suspects of right-wing populism at the expense of people in need."

Meanwhile, the populist right-wing Alternative for Germany (AfD) party, polling strongly in recent months, on Monday said it supported Denmark's decision to reintroduce border checks at the crossing with Germany. Party leader Frauke Petry took to Twitter, saying: "That which we've been demanding for our borders for months is now being implemented there." The post had an attached photo, with the slogan: "Denmark is protecting itself from 'stupidity without borders' and is introducing controls at the crossings to Germany."

The United Kingdom has granted asylum to Sudanese refugee Abdul Haroun. The man made headlines in August after walking 50 kilometers through the Channel Tunnel from France in a desperate bid to reach Britain. (04.01.2016)

Germany’s capital is struggling to provide for a record number of refugees. Authorities are planning to build more mass shelters, but activists say they offer only inhumane conditions and social discontent. (04.01.2016)