German Chancellor Angela Merkel is set to discuss the Iran nuclear accord, as well as the wars in Syria and Ukraine with Russia's Vladimir Putin. Merkel is one of the few leaders Putin "takes seriously" analysts told DW. 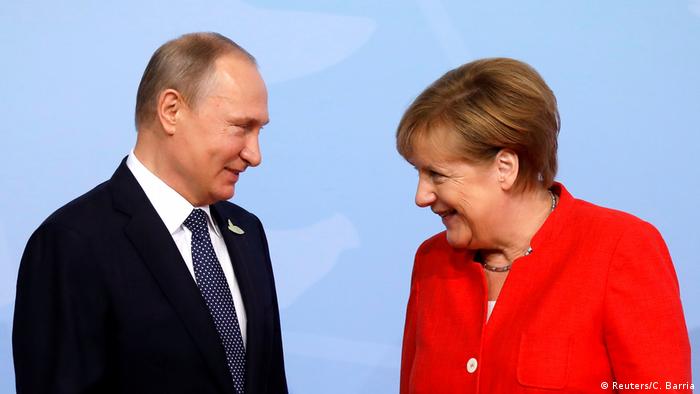 Germany's Angela Merkel has meet Russian President Vladimir Putin on Friday in Sochi where the two long-ruling leaders tackled an array of disputes between the two countries.

Ahead of Merkel's visit, both sides said Putin and Merkel will discuss the fate of the nuclear accord with Iran in the wake of Donald Trump's decision to pull the US out of the deal. The other areas of discussion would be the war in Syria and the crisis in eastern Ukraine, which saw the EU and Germany impose sanctions on Russia in 2014.

The sanctions themselves, however, are "not on the agenda," said Putin's spokesman Dmitry Peskov.

"Russia wasn't the one who imposed sanctions, Russia did not initiate the exchange of sanctions," he told reporters. "Therefore, Russia is not supposed to initiate this discussion (on the lifting of sanctions)."

Peskov restated Moscow's position that the economic sanctions were illegal, but added that Russia was keen to talk with Angela Merkel and the French leader Emmanuel Macron, whose visit is scheduled for next week.

"There is no question, however, that we are looking forward to talks, both with Germany and France, those talks are very important in Western Europe," Peskov said, according to comments carried by Russia's NTV.

With the two nations at odds internationally since 2014, Putin and Merkel now have at least one big area where they are in agreement — both countries want to salvage the Iran nuclear deal.

"Iran will be an important topic, because it is, at long last, a topic where the two sides share common ground and they plan to emphasize it," Stefan Meister, the head of Germany's Robert Bosch Center for Central and Eastern Europe, Russia and Central Asia, told DW.

He added that there was "no possibility of progress" in other areas, as Moscow and Berlin are "stuck in a dead end" when it comes to Ukraine.

Meister also said that Putin sees Merkel and Germany as central partners on the international stage.

"She is at least a person that Putin still takes seriously most of the time," he said.

In an analysis of German-Russian ties, Russia's independent Lenta.ru outlet says Moscow was surprised by Germany's tough stance on the Crimea crisis. Russia, according to the author Xenia Melnikova, failed to take into account that Germany is part of the EU and willing to impose sanctions even to the detriment of its interests in Eastern Europe.

"The situation is burdened by the fact that Russia, from the German perspective, is acting more and more unpredictably, which irritates orderly Germans."

"Germany is ready to hear Russia out, ready to stay in contact, even to turn a blind eye to transatlantic solidarity if necessary," Melnikova writes. "However, Russia also needs to be ready for concessions and compromises, for example – not to view the concerns of human rights and democracy as empty talk, merely a distraction from important economic problems."

The two sides have also been jointly pushing a gas pipeline connecting Russia and Germany via the Baltic Sea. The project, however, repeatedly triggered harsh criticism as it may leave Kyiv without substantial gas transit fees. According to media reports, US President Donald Trump offered Angela Merkel to renounce the promised tariffs on steel and aluminum if Merkel gave up on the Nordstream 2 pipeline.

Nils Schmid, a foreign policy spokesman for the Social Democrats, the junior coalition partners to Merkel's conservatives, told DW that Germany had always been too dependent on Russian gas.

"However, even during the Cold War we imported gas from the Soviet Union," said. "We have a good record of keeping gas rates out of political turmoil and Russia is more dependent on exporting gas to Europe than the other way round."

Observers believe that Berlin and Moscow have no intention of giving up on the project, although the Friday talks in Sochi might see them hammer out a compromise that would safeguard Ukraine's interests.

In an exclusive interview with DW, Russian economist and politician Grigory Yavlinsky says Putin's policy of protecting the Syrian regime was not in Russia's interest. Yavlinsky sees no change in Kremlin's policies. (17.05.2018)