Japanese researchers have bred skin tissue out of reprogrammed stem cells. The tissue included sebaceous glands and hair follicles. Is it a first step towards the dream of "breeding" transplantable test-tube organs? 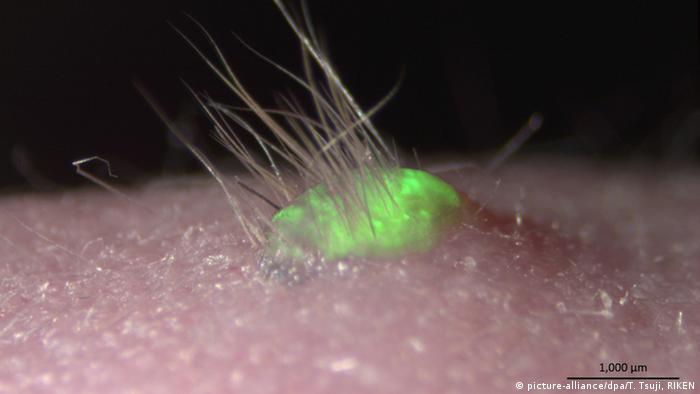 To breed skin tissue, the team of researchers around Ryoji Takagi at the Tokyo University of Science used induced pluripotent stem cells, also known as iPS cells, from mice.

Once transplanted onto a different mouse, the tissue was able to perform all the functions of normal skin, the scientists reported on April 1 in the journal "Science Advances."

The small white lumps of tissue grown in a lab aren't much bigger than peas, but they have the same basic structure as a brain. Researchers can now grown human brains in jars - just like livers and other bodily tissues. (20.08.2015)

Scientists in US and Japan achieve possible breakthrough on stem cells

A lab treatment can turna mouse's ordinary cells into stem cells, a surprising study has found. The research hints at a possible new way to grow tissue for treating illnesses such as diabetes and Parkinson's disease. (29.01.2014)

The 2012 Nobel Prize for medicine has been awarded to stem cell researchers John Gurdon and Shinya Yamanaka of Britain and Japan. They take the first Nobel prize of the year, with a flurry to follow over the next week. (08.10.2012)

Using colored proteins, scientists in Prague have found a way to make lab mice glow. They hope the new technique will help improve understanding of the causes of cancers and skin diseases. (07.05.2013)

iPS cells are "artificially reprogrammed" somatic cells. In other words: They're cells which, at some point in their development, reach something of a cul-de-sac and are only able to develop into one specific kind of tissue.

But after the reprogramming, these somatic cells are able to develop into any kind of organ cells.

That makes them similar to embryonic stem cells, which are the only cells that naturally have this ability.

The researchers influenced the iPS cells in such a way that they formed tiny lumps of tissue, called "embryoid bodies." Under normal circumstances, those lumps then develop into various forms of tissue uncontrollably.

However, the scientists added a signal protein and implanted the cells close to the kidneys of the mice for some time.

This triggered the development of skin cells, which included sebaceous glands, hair follicles and even muscle fibers.

The scientists then transplanted the tissue to the skin of mice that were originally bred to have skin bare of hair follicles. After two weeks, the mice grew real hair.

Furthermore, the transplanted tissue connected to the existing nerve and muscle cells.

There is a high risk in stem cell research that the animals will grow tumors as the result of such experiments.

In this case it did not happen, however - even after three months. 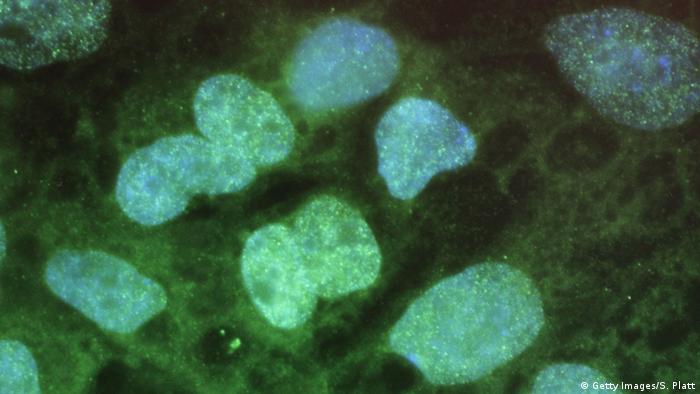 All cells are descendants of stem cells, but only embryonic stem cells can develop into any other kinds of cell

One member of the research group, Takashi Tsuji, expressed hope that the method could one day be used to create functioning organs suited for transplants in a laboratory.

Before the scientists look into other organ cells, however, they first want to see if it is possible to create human skin using the method in order to transplant it to burn victims.

Andreas Trumpp, chairman of the department of stem cell research at the German Cancer Research Center in Heidelberg, told the German press agency dpa that the mouse model can only be seen as a first step towards the creation of human skin.

"The study is an improvement on an existing concept. But it does not yet create clean and complete skin tissue, but rather small lumps with lots of hair follicles," he said.

Trumpp, who is also the director of the cancer research center's Stem Cell Institute, added that the study has not yet proven whether the skin actually does fulfill all functions of natural skin, like functioning as a protective barrier or being able to sweat.

The Japanese scientist Shinya Yamanaka received the 2012 Nobel Prize for medicine for inventing the process of reprogramming body cells into iPS cells, which he achieved in 2006.