Is the OSCE still relevant?

On this week's "Conflict Zone," Lamberto Zannier, OSCE Secretary General, discusses how his organization can maintain relevance in a world with aggressive states, brutal dictators and a troubling political landscape.

The Cold War is slowly coming back to life, with the conflict in Ukraine simmering, Russia buzzing American warships in the Baltic and Soviet-era bombers lurking near European airspace.

"Geopolitics are back," Lamberto Zannier, Secretary General of the Organization for Security and Co-operation in Europe (OSCE), said on DW's Conflict Zone with Michel Friedman. "We see competition, we see confrontation, we see lack of confidence in Europe. We also see a problem of lack of reconciliation after the end of the Cold War."

Zannier is stuck in the middle, trying to be impossibly diplomatic. He is tasked with confronting human rights abuses and military aggression while staying on the good side of 57 countries that make up the largest intergovernmental organization in the world, including Russia, Ukraine, the United States and all 28 EU member states.

The question is, can an organization with such a broad mandate be successful at keeping peace, strengthening democracy and bridging divides?

Is the OSCE effective in Ukraine? 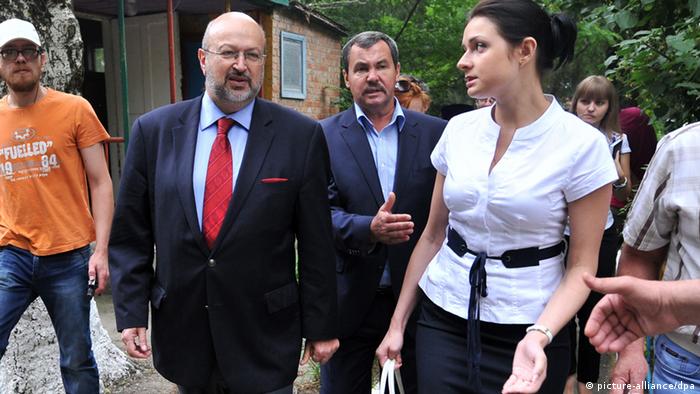 On April 28, the OSCE warned of a "blatant disregard" of peace agreements in Ukraine. With the conflict in eastern Ukraine ongoing since the Minsk agreement was signed in September 2014, the organization's warning is sounding more and more like a broken record.

"It is difficult for the international community - and this is not only the OSCE - to stop a conflict of this magnitude," Zannier said on Conflict Zone, defending the OSCE's response to the crisis.

The OSCE has more than 700 monitors on the ground but they often have difficulty even observing effectively. Out of 37 land crossing points between Russia and Ukraine, OSCE observers are allowed at just two.

Part of the issue is that observation missions like the one in Ukraine must be approved by consensus of all countries, so Zannier must remain extremely diplomatic.

"It's more difficult to operate by consensus," Zannier said. "It takes more time." 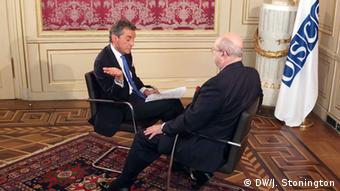 It also takes speaking extremely carefully. At one point, Friedman asked Zannier if member states like Poland and the Baltics were right to be afraid of a Russian aggression.

"I think the concerns are legitimate and we are taking them into account, too," Zannier said.

"So what does it mean: 'taking concerns into account?'" Friedman asked.

"This means that I give them a platform to clarify, and, first of all, to express their concerns, and then to discuss them with everybody else," Zannier responded.

Could the OSCE push harder for democracy and human rights?

The OSCE isn't just a security organization, their OSCE mandatemandate also extends to "respect for human rights and fundamental freedoms, including the freedom of thought."

"There is not a single model of democracy," Zannier responded. "So democracy must take into account culture, history, social aspects of each of the countries. So there isn’t a blueprint that can be applied. (...) Democracy is work in progress."

Zannier has worked in international diplomacy for his entire career, starting out in the Italian foreign service, working through positions at the United Nations and OSCE, with a focus on arms control and security issues. He was appointed Special Representative of the UN Secretary-General for Kosovo from 2008 to 2011. He took office as Secretary General of the OSCE on July 1, 2011.

At the Munich Security Conference, the commander of the US Air Forces in Europe and NATO Allied Operations, General Philip Breedlove said 'no one wants a new Cold War.' DW's Michael Knigge posed the questions. (13.02.2016)

Organization for Security and Co-operation in Europe