′IS′ splits Iraq′s Sunni community and families | News and current affairs from Germany and around the world | DW | 11.02.2017

Although the "Islamic State" (IS) group has been driven from the eastern half of Mosul, their influence is still keenly felt within the Sunni community. Judit Neurink reports from Khazir Camp. 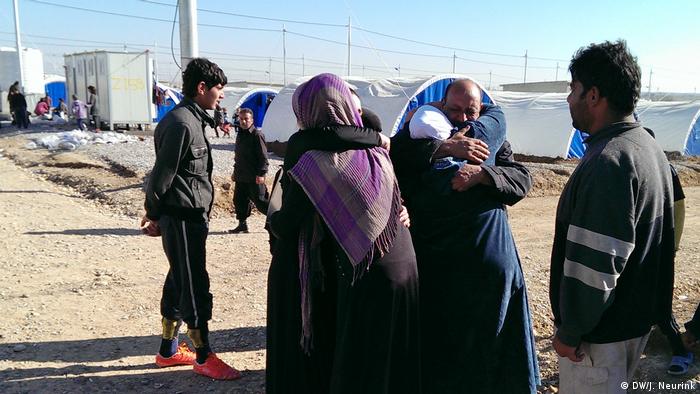 Taking a break from shoveling sand against the bottom of the tent his family has been assigned in Khazir Camp southeast of Mosul, Ahmed Ali Hamna, 39, relates how he spent two years hiding from the self-styled "Islamic State" (IS). The former policeman recently arrived from Iraq's second city Mosul.

"When Daesh catches you, they will behead you," he tells DW, using the local Arabic name for IS. That risk was not new to him: As a police sergeant in Mosul, he was always at risk for not joining the group. "For two years, I hid, going from house to house. And when you do go out, you make sure your trousers are short and your beard long enough, so you nobody notices you."

A young woman appears from the tent. She is his widowed sister, Hamna says. "Daesh killed her husband, my cousin. They took him from his home because he was in the intelligence services before. After a month in prison, he was executed."

The victim was his brother, Abu Sabrine, 24, tells DW, sitting alone and watching how Hamna is now covering the tent with silver-colored sheets of isolation material. "My brother was betrayed by my cousin. And a second brother died because of a suicide attack by IS." 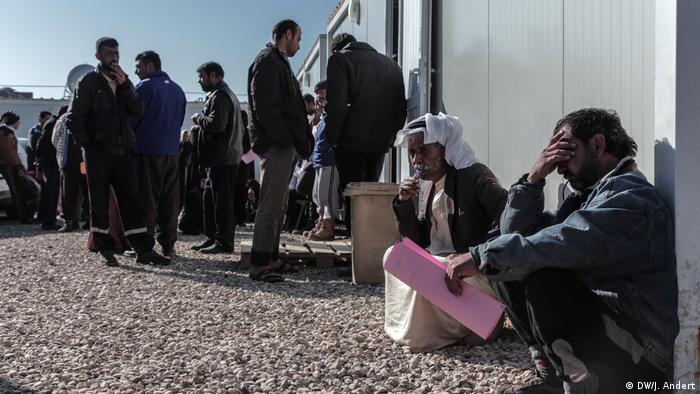 Waiting for documents made under IS occupation to be legalized

The story of this family shows how IS not only split society, but also families. Seven of his relatives complained about the intelligence past of his brother to IS, Abu Sabrine says, who is using a pseudonym to protect himself. At least four of his cousins actually joined the radicals. "They threatened me that if the army came and I reported them, they would kill me."

He felt very uncomfortable about the situation. "With Daesh in your family, they know all about your life and your past, and it is very hard to keep a low profile."

The young builder had to hide how much he loathed them, he says. "They killed young and old, took people's money and cars, killed two of my brothers! I hate them!"

Yet people around him would judge him mainly for his family ties with IS members, says the father of two baby daughters. They would keep out of his way. "People distrust you, hate you. Nobody will get close to you anymore."

While the Iraqi army has so far liberated the eastern half of Mosul, the number of people fleeing the city has also risen. Weekly, some 10,000 civilians reach the safety of camps for the internally displaced, like the one in Khazir, just outside the Kurdistan Region of Iraq, which houses over 30,000 people in more than 6,000 tents. In total, some 150,000 people have fled the Mosul area since the battle started in October. 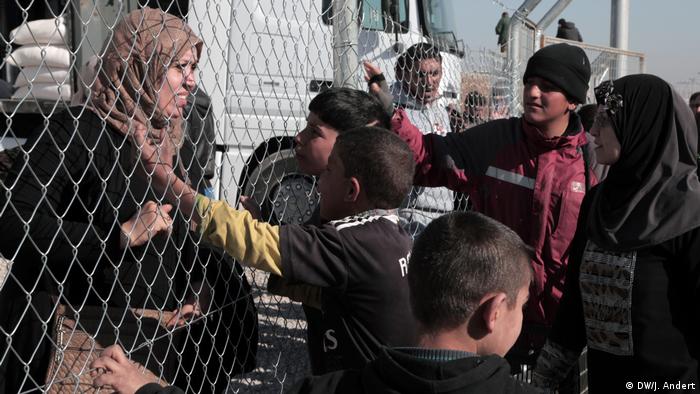 Newcomers in the camp wait for NGO's to distribute aid

With their arrival, the suffering of two years under IS occupation becomes all too clear. Most people hardly talk about the recent violence, the mortars that hit their houses, the snipers, and the car bombs, even though half of all those who were wounded in Mosul are civilians. Some of their stories are about hunger and shortages, but most are about fear, suppression, deceit, and betrayal.

Some volunteer their stories, desperately wanting to share them with the world. Like Ahmed Hilla,18, who pulls up a trouser leg to show his badly maimed leg. "They pulled me behind a motorcycle through the street," he tells DW. "My leg was broken and has never been looked after."

He says he was targeted for not abiding by IS rules. He listened to music on his headphones, Shiite music, even though he knew how much IS hates Shiites - to which group he does not belong. And he must have been aware of the danger, as his brother had been executed by IS for working with the Americans. "I was bored," he says. "Yes, you can call it resistance. It was my neighbor who reported me."

IS is infamous for the way it punishes civilians. Fleeing is no guarantee for safety. Hillal arrived alone in the camp after his family was caught when they tried to cross the river that divides the city. "We were going across by boat. I got away. But I do not know if they are dead or alive."

Mouna Abbas, 24, recounts that she was lucky to escape alive. "We tried to escape in the night through a valley with a small river. Daesh forced us to hide in the cold water for hours. My father was frozen and can hardly walk anymore."

IS has torn apart the Sunni communities, she says. "It's hard to see a future. So many joined Daesh. They stormed the houses, scared the children, there are so many traumas. We cannot live with them anymore. My cousin now works with the camp security to make sure none of them will sneak in."

"Never!" says Haifa Ibrahim when asked if she would live next to someone connected to IS. She hugs her young daughter. "We will report anyone who has been with Daesh. There were some in our neighborhood of whom we had never expected it. They were normal people. You wonder how they changed so much."

Families of IS members have already been banned from a number of places in Iraq. Human Rights Watch (HRW) is alarmed, as the provinces Salahadin and Babel have issued decrees to prohibit them from returning and to confiscate their properties and belongings. Clemency is promised only to those families who turned in the relative who worked with IS, or killed him. In Anbar province, the tribes decide who is allowed back. In areas under Kurdish control, dozens of villages have been destroyed because they housed IS members - in many instances innocent villagers who had nothing to do with them became collateral damage. 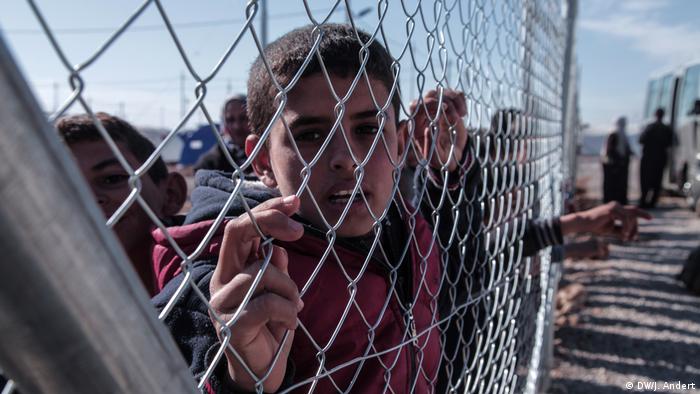 HRW points out that often families do not have the power to keep sons, daughters, or relatives from joining. For many, it has become unclear where they will be able to settle and puts in doubt any reconciliation process, the human rights organization warns.

The expectation is that the measures against IS families will differ from neighborhood to neighborhood and from tribe to tribe. People connected to IS may relocate to areas where nobody knows them, where they can possibly start afresh without the shadow of Daesh lingering over them.

Former policeman Ahmed Hamna points out that many who were with IS in Mosul had no alternative or were forced to join. "They are victims too." At the same time, he calls them "mafia" and "the cancer cells in our Mosul society with all its different groups. Everybody who was with Daesh, should be tried."

For his wife's brother-in-law, that is not enough. Abu Sabrine, who lost two brothers but at the same time is looked upon with distrust because of his cousins' IS involvement, is very clear what he thinks should be done with IS members who are caught. "Execute them. They should all be hanged."