In Berlin's courtyards, you're less of a stranger

Is the Berlin courtyard the heart and soul of civic life in the capital? DW's Stuart Braun wanders into some Berlin backyards to find out.

"Come over to the Hof," a friend used to ask not long after I moved to Berlin. I didn't quite get it until I saw the chairs and tables, bar fridge and TV screen set up in a typical Berlin courtyard often associated with trash bins and bicycles. That day we drank in the sun and watched some World Cup football with neighbors who drifted in and out of the Hof from the surrounding apartments.

Here was the true potential of the Berlin Hof, I thought, a unique public/private space you don't see in many cities - especially not in New York, or in Australian suburbia. I wondered whether Berlin is so relaxed because people already share their lives in the Hof? Could this unsung inner realm be the communal glue that binds the city?

In my own Hof, I often stop to chat to staff from the adjoining restaurant, who take smoke breaks in the yard, or the old Polish guy from upstairs returning from his daily shopping round. I also like to peer into the Hof from my apartment window, spying the comings and goings of neighbors, or the chef who seems to smoke constantly under the chestnut tree. And I can just see the adjacent Hof where, on summer nights, music blasts from balconied apartments with wide-open doors.

Somehow, my Hof subconsciously connects me to the community, a tenement village that is the building block of Berlin.

Those who live in the side or back apartments that look onto the Hof - as opposed to the more elaborate street-fronted flats - are often happy to leave their curtains open and make their lives transparent.

"That was something that surprised me when I first got to Berlin," the English writer Clare Wigfall told me recently. Prague, where she had previously lived, was "much more closed," she added, "and I guess that kind of reflects the greater openness you get in Berlin, to the literal extent that people don't draw the curtains in their flats."

But in Berlin there are many kinds of courtyards, vast inner catacombs of life that importantly feed and complement the energy of the Berlin streets. Of course, there's the Art Nouveau, high culture Hackesche Höfe in the Mitte district, a series of eight courtyards - the largest of its kind in Germany - that once housed factories, expressionist poets and a large Jewish population.

Then there are the Höfe squatted since the 1980s, vast adjoining factory yards that have become cities within the city, communal interior realms housing kindergartens, artisan workshops, cafés, cinemas, and so on; or Meringhof in Kreuzberg, home to a theater, socialist book store, punk music venue, Turkish trade union and much more, a space most would pass on the street but which has long been an important incubator for Berlin radicalism.

Berlin's left has always identified with the working class undertones of the Hof. Today, somewhat inevitably, the art scene is also colonizing these spaces. Last week, among the 40-odd exhibitions at the Gallery Weekend Berlin, half seemed to be happening in urban courtyards. I saw film director Wim Wenders in one, an industrial courtyard once used by the Tagesspiegel newspaper that now houses at least four galleries.

Down the road at Zimmer Strasse, which cuts across Checkpoint Charlie, another gaping Hof hosts a clutch of galleries that have moved away from more rarefied central Mitte district. 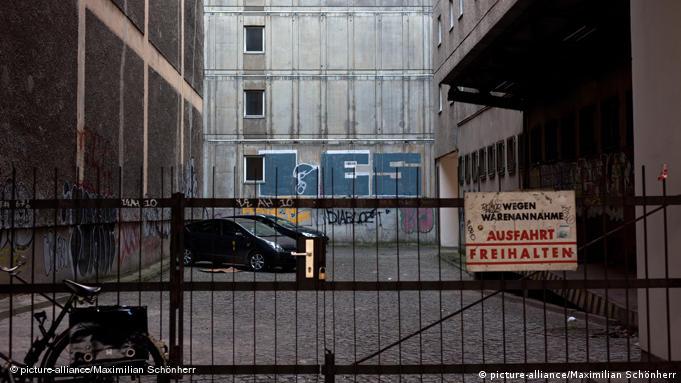 They come with varying degrees of charm

Yep, Höfe are cool. But they didn't used to be. The Hof is the locus of a building and the urban planning model that once made Berlin the scourge of Europe. Known as Mietskasernen (literally rental barracks), the basic Berlin tenement block was first designed to house industrial workers on a mass scale, allowing the German capital to industrialize like no other city on earth.

The first Mietskaserne, known as Meyer's Hof, was built in 1875 - in working class Wedding. It included six courtyards, and housed 2,000 people in 300 apartments. By 1930, one city planner, Werner Hegemann, critically described Berlin as "the largest tenement city in the world." Then, overcrowded Berlin blocks were seen as breeding grounds for poverty, disease, licentiousness, and - worst of all - socialism.

But in some ways, Mietskaserne weren't that bad. Courtyards in New York tenements, by contrast, were often only a few feet wide, and offered very little light; but in Berlin, speculators were forced to insert decent yards between the buildings - factories, workers quarters, front apartments for the rich - that stretched deep along long narrow blocks.

"You had to leave a certain amount of space between the wings, so that you could turn around a fire engine and place a safety net," building historian Michael S. Cullen told me, adding that height restrictions to allow for sunlight were also mandated.

Less of a stranger

During the 1970s, Mietskaserne became romanticized as a vital microcosm of the city, and many squatters and activists moved to protect old tenements threatened by blanket urban renewal. I'm glad. Today the Hof, and the blocks that encircle it, is a Berlin trademark, offering accommodation that is relatively cheap, roomy, classless, and that forces people to live together.

Wigfall put it best when she described, in a story for US public radio broadcaster NPR, the transparent lives of people in her own Berlin block: "It's already something I've come to love about the city ... being able to glance into other people's lives somehow comforts me, it makes me feel less of a stranger in this new city."

Berlin may be famous for its tolerance, but when it comes to fashion, the rules are strict - and vary by neighborhood. Metropolitan chic in the German capital is a much more complicated style guide than you might think. (06.05.2011)