How "Russian Berlin" deals with refugees

Russian speaking residents in Germany are not indifferent to the refugee crisis. Most appear to be opposed to refugees . Yet there are others in "Russian Berlin." 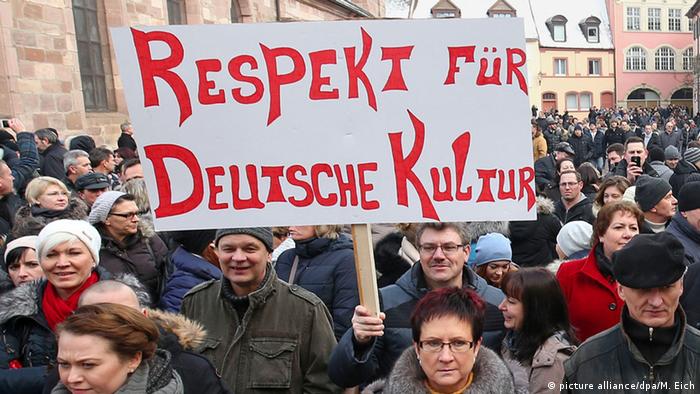 The Russian wife of a successful German businessman is shocked by the large number of refugees coming to Germany. "They are all parasites," she tells a Deutsche Welle reporter, while dining in a trendy Berlin restaurant.

A Ukrainian man, who describes himself as a sociologist, calls refugees "cavemen."

The editor of a Russian language Berlin newspaper thinks that the refugees are coming to Germany solely for economical reasons. And the wife of a Jewish man who immigrated here from the Moldavan capital Chisinau, actually starts screaming when asked about refugees.

Opposed to the chancellor's policies 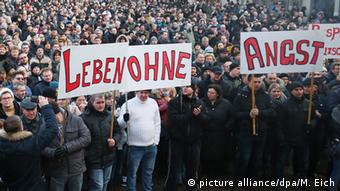 Russo-Germans protesting against refugees in Berlin

Polling data on the attitudes of Russian speaking people in Germany do not exist. One can, however, observe their attitudes. As was the case when Russian speaking residents took to the street last Saturday to protest Chancellor Angela Merkel's refugee policies. The reason for their raised tempers derived from Russian television reports that a young girl from a Russian speaking family in Berlin was supposedly abducted and raped by refugees.

"Many criminals are coming here disguised as refugees," says Lilia, while handing out pamphlets in front of the chancellor's office. A man named Viktor tells a DW reporter that, "90 percent of those arriving here are between 25 and 35 years old. They don't want to work." Another person taking part in the demonstration says that she accepts refugees from Syria, because there is a war going on.

"But what are Algerians, Moroccans, Afghans and Gypsies doing here? They should all be deported," she adds. "They come here to rob, abuse the welfare system and to rape, but not to integrate," says another woman named Marina. "Besides, the young healthy men would do better to stay home and defend their country."

What's behind the anti-immigrant sentiments?

Ksenia Chepikova and Olaf Leisse, researchers from the Institute for Political Science at the University of Jena, see three main reasons for the spread of anti-immigrants tendencies among ethnic Germans.

First, there is the issue of their own identity crisis. They consider themselves to be German, but most Germans think of them as foreigners. 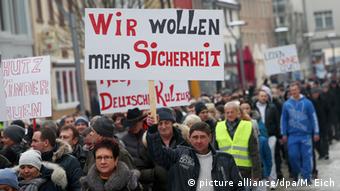 The second factor is the loss of their former social status. Living standards among ethnic Germans are often lower than those of local Germans.

The third reason, according to the researchers, is that, "Many Russo-Germans come from countries with high levels of xenophobia, anti-Semitism, Islamophobia and anti-Americanism."

Nevertheless, not all of "Russian Berlin" is opposed to refugees. One can see that for oneself at Beusselstrasse 26, in Berlin's Moabit neighborhood. That is where the citizen's initiative "Neue Nachbarshaft" (New Neighborhood) is located. The initiative is organized by Marina Napruschkina, who is originally from Minsk, in Belarus.

She came to Berlin to study art in 2000, she then married and had a child. In 2013, she befriended women from Chechnya and Dagestan while at a local playground. They were eventually able to convince authorities to supply them with a room for an improvised kindergarten. "We brought our own chairs, tables, paints and paper, and we showed animated films," says Marina.

Now the refugees from the North Caucasus are a minority among the 400 or so regular visitors at the center. "Africans, Syrians and Chechens all have a place at our table."

One of "New Neighborhood's" main tasks is providing German language classes. There are no certificates though. Lessons are given by students and everyday people from the neighborhood. But learning German isn't everything. Maria emphasizes that it is necessary to internalize the country's values. She says she is disappointed that many of her former compatriots reject the influx of new refugees.

Berlin has asked Russia not to politicize a Russian-German teen's potential rape after comments from Russia's foreign minister. The girl told lawyers she was abducted and raped by migrants two weeks ago. (27.01.2016)