How Germany′s Easter bunnies are tormented for food | Germany | News and in-depth reporting from Berlin and beyond | DW | 17.04.2017

How Germany's Easter bunnies are tormented for food

Animal rights groups have used the Easter holiday to flag up the plight of rabbits farmed and fattened for food in Germany. The legislation is not strong enough to protect the animals from suffering, they say. Hunters in New Zealand have slaughtered almost 10,000 bunnies in an annual rabbit-shooting event in the country's southeast. Organizers say the Easter hunt aims to curb the ballooning rabbit population. (26.03.2016)

As meat consumption skyrockets, German writers and philosophers Peter Wohlleben and Richard David Precht insist that animals - and plants - have feelings, too. (22.03.2017)

Animal rights groups have marked the Christian holiday with a plea to end the cruelty to farmed rabbits in Germany.

The German animal protection organization Deutscher Tierschutzbundreleased a statement at Easter this year claiming that most farmed rabbits were still being kept in extremely cruel conditions. Some 30 million rabbits are consumed in Germany every year, roughly a quarter of which are slaughtered and eaten around the Easter holiday, while others are sold and given as presents.

"Not even the animals' basic needs are covered in rabbit farms," Deutscher Tierschutzbund's Esther Müller said in a statement. "The rabbits live crammed together in barred cages in poorly ventilated halls. This has nothing to do with the idyll of a rabbit hopping on a green meadow."

The organization, which represents 740 local animal rights groups and boasts 800,000 members, says the conditions that rabbits are kept under lead to injuries and abscesses on the animals' paws, as well as digestion problems because of the poor diet.

The rabbits also show signs of psychological disturbances, including aggression, which the group puts down to the lack of space and the lack of materials like soft wood for them to chew.

Poor regulation is better than none

Rabbit farming is one of the last areas in industrial animal husbandry to introduce welfare standards. While many European countries have no regulations at all, the German government only built a special "rabbit provision" into the country's animal protection laws in 2014. It stipulates minimum standards for the care of farmed rabbits, including the size and structure of cages, which are supposed to provide different spaces for activity and rest. Farm workers are also obliged to check the animals twice a day for signs of illness. 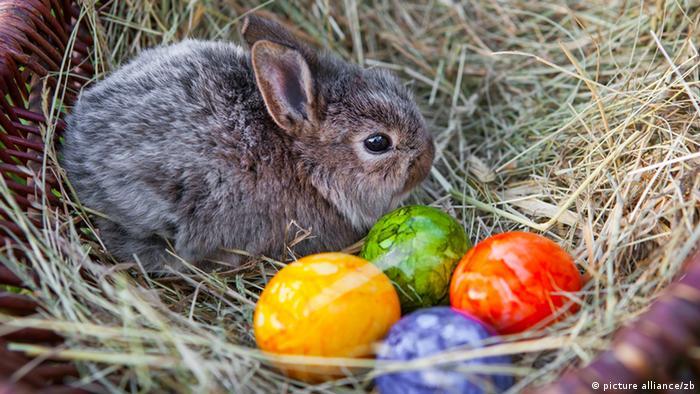 Some 30 million rabbits are eaten in Germany every year, say animal rights associations

"This is the first time we have ever had detailed standards and clear regulations on farming rabbits for commercial purposes," Agriculture Minister Christian Schmidt said at the time, before calling the law "another step on the way to animal protection in livestock husbandry."

But animal rights groups beg to differ. "Caged housing without space to move remains the status quo," the Deutscher Tierschutzbundsaid in a statement last week, claiming that the law left rabbits with "completely insufficient" protection.

According to the Albert Schweitzer Foundation, another German animal rights organization, farmed rabbits are fed dry energy-rich pellets designed to make them as fat as possible in the shortest amount of time - they are often slaughtered when aged only 84-90 days, by which time they've reached a weight of three kilos (6.6 pounds).

Germany's rabbit farmers, on the other hand, have completely different concerns. According to Werner Ziegler, director of the BVK, the association of rabbit-meat producers, Germany's welfare standards are too high, and so leave farmers struggling to compete with cheaper rabbit meat from Italy and Germany's eastern European neighbors. 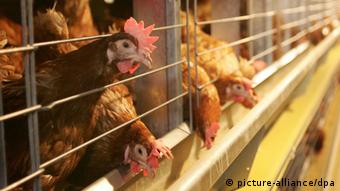 "Consumers only pay for the expensive farming in Germany at store counters in a very limited way," Ziegler told the "taz" newspaper.

There is a campaign afoot in the European Union to counter this by introducing EU-wide minimum standards for farming rabbits, which already exist for pigs, calves and chickens.

According to Sven Giegold, a member of the European Parliament for the German Green party, this is vital because three-quarters of Europe's farm rabbits are being kept in Italy, Spain and France, which have no rabbit-farming standards at all.

This would also be happy news for Ziegler too: "We were always in favor of a European standard," he told "taz." "Minimum EU standards would give German producers similar conditions to French, Spanish and other farmers."

Rabbits - not just for Easter

Animal protection groups were also keen to use the Easter holidays to warn people against giving rabbits as gifts. "Rabbits are very unsuited as pets for children," the Deutscher Tierschutzbundsaid in its statement, "because constant lifting, stroking, and cuddling mean stress for the animals. On top of that, many people underestimate the fact that rabbits can reach 10 years and older, and a small cage in a child's room or living room is not enough. These animals need a lot of space, and, as social animals, should be kept at least in pairs."

According to the Albert Schweitzer Foundation, rabbits maintain complex social relationships in the wild, and like to live in large colonies comprising two or three males, several females and their young. These colonies can extend to some 110 underground chambers.

The biggest reindeer herds in the world can be found in the Arctic Circle. Local officials are planning to cull a large number of the animals to stop over-grazing and the spread of disease. (10.12.2016)