Germany's blue-chip stocks index, the DAX-30, has completed a fourth year of a rising trend as 2015 comes to a close. An index of European blue chips also rose, albeit by only half as much. 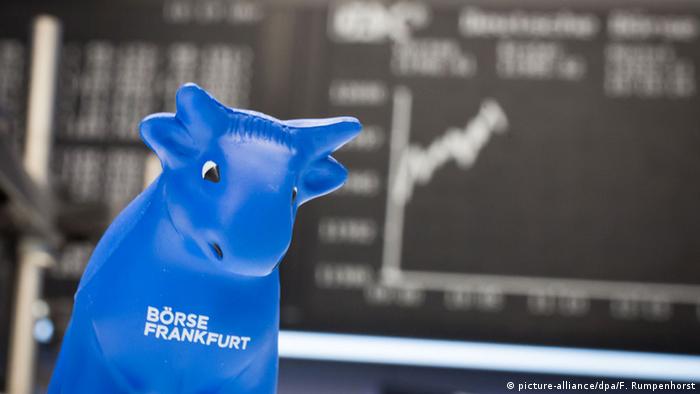 Analysts at M.M. Warburg said the thought that barring unforeseen incidents, the rising trend should continue in the new year. Germany remains a strong economy and a respected global brand.

In the spring, the DAX index initially rocketed upward, rising as high as 26 percent over its value at the start of the year, driven by the tsunami of money pumped into financial markets by the European Central Bank's quantitative easing program. At one point the DAX reached 12,390 points. 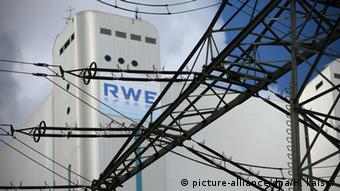 A lignite fueled power station at Niederaussem, western Germany, owned by RWE, the worst performer on the DAX index in 2015

But then China's growth began to slacken, and so the pace of DAX valuation growth also slackened as 2015 unfolded. Germany's economy is heavily export-oriented, and in recent years, Germany has sold a lot of gear to China - industrial goods and machine tools as well as automobiles - so German corporations' prospects are seen as linked to China's fortunes to some extent.

The DAX had a 2015 low of 9,325 points, so the year-end value of 10,743 represents a recovery of less than halfway to the peak value reached in springtime.

Nevertheless, with interest rates likely to remain near zero for a long time to come in the eurozone, and institutional investors looking for alternatives to buying bonds as a result, it's likely that European stock markets will continue to benefit from the pressure of money seeking some kind of return on investment. 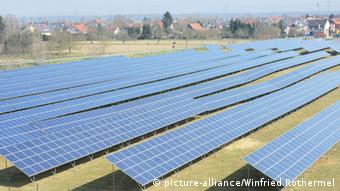 RWE's rival Eon has got the memo: it's investing in a transition to wind and solar power

One stock that did particularly well this year was Adidas unfazed by FIFA scandal:Adidas,# which closed out the year 56 percent higher in value than it had at the year's beginning. It was the strongest rise of any of the 30 blue-chips in the DAX. But this rise needs to be kept in perspective: Adidas had lost 40 percent of its share value over the course of 2014, so most of 2015's gains were merely a recouping of ground lost in the previous year. Still, the company made an impressive turnaround in sales and profits in 2015.

Two other DAX listed companies very nearly matched Adidas's share price rise: Fresenius, a maker of medicines, and chipmaker Infineon, both of which rose 53 percent on the year.

On the downside, the ongoing troubles of old-school energy utilities still heavily invested in coal and gas generating equipment - a serious problem in light of Germany's continuing move to renewable energy generation - were reflected in share valuations. RWE, one of Germany's biggest utilities, lost 54 percent of its stock market value on the year. RWE's competitor E.ON, which has been striving harder to make a transition to a renewable energy future, took a somewhat less severe hit, with its shares losing 37 percent of their value on the year.

The third worst DAX-listed performer on the year was Volkswagen Group, whose shares sank nearly 28 percent compared to the beginning of the year. That was a result of fallout from the company's much-publicised emissions fraud, exposed in September, in which the world learned that VW had radically misrepresented the noxious emissions from millions of its diesel engines.

However, perhaps surprisingly, VW Group hasn't seen any decline in global automobile sales as a result. The company is shifting gears in response to the scandal, with new senior managers in place looking to accelerate a move to genuinely clean engines - in particular, a faster move to electric vehicles. This suggests the long-term damage to the company will be quite limited in scope.

There will be substantial financial claims against VW during the next couple of years as it deals with fines and lawsuits arising from the emissions scandal, but given that the company remains neck and neck with Toyota for the title of world's largest carmaker, there's reason to suspect VW shares may be a bargain at their current depressed price.

First it cheated on emissions tests; now Volkswagen has come under fire for potentially misusing billions of euros in EU funds. The irony: the money was meant to fuel the development of eco-friendly engines. (16.12.2015)

Japanese carmaker Toyota has indicated it's not expecting to profit directly from the huge emissions cheating scandal that has hit its German rival Volkswagen. Toyota is expecting little growth in sales next year. (16.12.2015)

Germany's second-largest power firm RWE will split its operations by separating renewables, grids and retail operations from conventional operations. It is to be listed on the stock market in late 2016. (01.12.2015)

Vladimir Putin is trying to force the United States and the EU to put pressure on Ukraine's government. The Russian strongman's experiences since 2014 make him think he just might succeed, DW's Konstantin Eggert writes.