The Bundeswehr helicopter that crashed in Mali last month, killing two German soldiers, had lost its rotor blades before hitting the ground. The military stressed it was still too early to say what caused the crash. 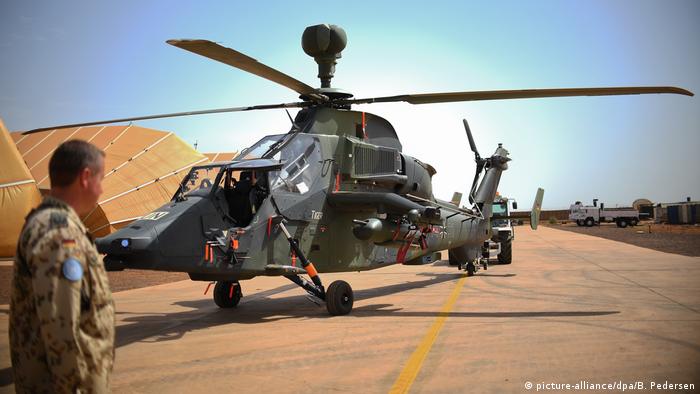 Germany's military spokesman Jens Flosdorff indicated on Wednesday that it could take months before they know what exactly caused a military Tiger helicopter to crash during a peacekeeping mission in Mali last month.

His remarks came after an interim report by the German military - obtained by multiple news agencies - said that the Bundeswehr Airbus chopper, which crashed on July 26 about 70 kilometers (43 miles) northeast of the city of Gao, had begun breaking up while still in the air.

The Bundeswehr investigation found that the chopper had lost its main rotor blades before it crashed to the ground, killing both crewmembers – the first Bundeswehr casualties in combat in almost two years.

It was still unclear what caused the chopper to dive, or what caused parts of it including the main rotor blades to detach, Flosdorff said. Parts of the helicopter's flight data and cockpit voice recorders had been retrieved, although only one was still in good enough condition to be analyzed, he added.

Too early to point fingers

While Flosdorff warned against "hasty conclusions" over what caused the crash, an in-air break up could indicate that manufacturing or maintenance issuescontributed to the incident. Up until the crash, the chopper had been embarking on an "inconspicuous flight path," according to the report. At the time of the incident authorities had said that there were no indications that the Tiger had come under fire.

Speaking to the "Passauer Neue Presse" newspaper on Wednesday, German Defense Minister Ursula von der Leyen said there was nothing to suggest that the crash "was connected with the pilots' training."

Airbus, the helicopter's manufacturer, declined to comment on the report. A spokesman said only that the company was "aware of the interim report" and was "committed to support the investigation as and when required by the authorities."

Following the crash, Germany suspended all further flights with similar helicopters, pending the findings of the investigation. The Bundeswehr said it was also in contact with its French and Spanish counterparts, who also use the helicopter.

The deployment of Tiger helicopters had already roused controversy among military ranks, as they required additional maintenance in Mali's high heat.

German forces are in Mali as part of the UN's MINUSMA peacekeeping mission, an effort to stabilize the country and support a peace agreement between the government and rebels. The deployment in Mali is considered one of the world's most dangerous UN missions.