German industry leaders have warned of the damage caused by the long strike of flight attendants at flag carrier Lufthansa. They said production interruptions were among the costly consequences. 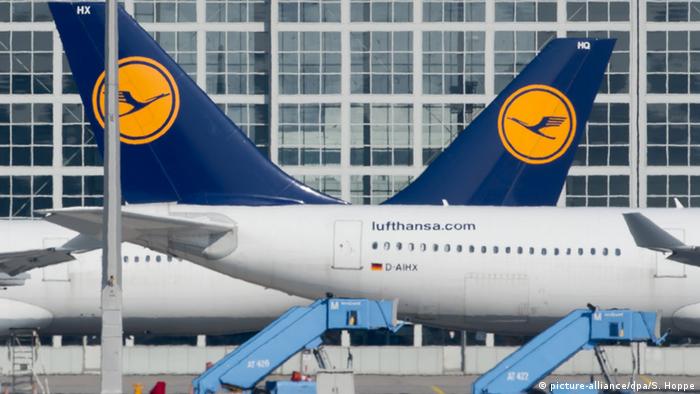 The ongoing strike by Lufthansa flight attendants would cost the German economy dearly, the Association of German Chambers of Industry and Commerce (DIHK) said Tuesday.

The longer the strike lasts, the bigger are the interruptions in production processes," DIHK Managing Director Martin Wansleben told the Tuesday edition of the regional German daily Passauer Neue Presse.

He said often high-quality components were shipped by plane, adding that even the smallest switch, which was not delivered in time, could halt the assembly of a whole machine.

Ufo trade union in the crosshairs

"If strikes like these continue for days, the damage done to the economy can amount to 25 million euros ($26.8 million) per day," Wansleben argued as Lufthansa flight attendants started their fourth day of industrial action over wage demands and early retirement regulations.

This comes as cabin crew union UFO announced plans to expand industrial action until Friday, which would ground all of the German airline's long- and medium-haul flights from Wednesday.

On Tuesday, the carrier had announced the walkout would affect 136 flights and 27,300 passengers in Munich, Frankfurt and Düsseldorf. This took the total number of grounded flights since the strike began on Friday to nearly 1,900, leaving more than 235,000 passengers stranded.

Lufthansa told Reuters on Tuesday it had filed an injunction at two labor courts in Germany with a view to halting the strike.

An economic affairs spokesman for the ruling conservatives, Joachim Pfeiffer, told the "Rheinische Post" newspaper to put an end to "disproportionate industrial action" so as not to jeopardize Germany's attractiveness as a business location.

He added small unions representing only small professional branches should no longer be in a position to take a whole industries hostage.