From prostitutes in Bangladesh to Libyan fighters: award-winning photos

The Sony World Photography Awards, the world's largest photography competition has selected 30 photographers for 2017. Two Germans, Sandra Hoyn and Peter Franck, are among the winners.

A prostitute in Bangladesh rocks her baby while a customer lies next to her, fast asleep; a fighter in Libya takes a break in the midst of a battle and a single mom in Saudi Arabia plays with her child - the winners of the Sony World Photography Awards have captured depressing but beautiful moments from different cultures.

"The Longings of Others" is the title of Sandra Hoyn's impressive photo series about sex workers in a brothel in Bangladesh. The German photographer won first prize in the "Daily Life" category. It is awe-inspiring to see how the photographer delves into the story, the jury said. The people in the photos seem to have forgotten all about the camera. 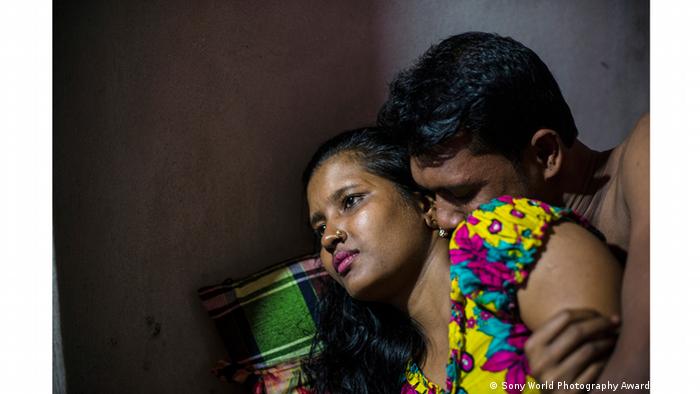 Third place in the "Landscape" category also went to a German photographer, Stuttgart-based Peter Franck, for his black and white series about the sea.

Belgian photographer Frederik Buyckx won this category, as well as the Photographer of the Year award. His "Whiteout" series shows motifs from Scandinavia, Central Asia and the Balkans, revealing profound suffering as well as "the joys and charm of the landscapes."

"I hope this award will inspire many more photographers to take pictures that do not simply encompass the terrible aspects of life in these troubled times but also capture some of the joys and loveliness in each and every environment," jury head Zelda Cheatle said. "Landscape is often overlooked, but it is central to our existence."

The Sony Photography Awards were held for the 10th time. The photographs are on display at Somerset House in London until May 7.

An exhibition of photos from the East German fashion magazine "Sibylle" has opened at the Kunsthalle in Rostock. One of the photographers was Sven Marquardt, who's now a bouncer at the legendary Berlin Berghain club. (27.03.2017)