Some Europeans are concerned about US hegemony in the worldwide information market. Now France -- and maybe Germany -- aims to develop a Eurocentric alternative to the dominant Internet search engine, Google. 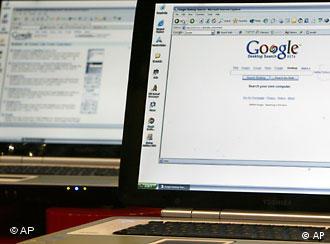 Google: Source of information, or source of all evil?

Checking a fact? Planning a vacation? Want information on an illness, a restaurant, a historical event, pet care? Forget all those dusty reference books and do what nearly everyone with an Internet connection does: Google it.

The Internet has become the place where much of modern society turns for answers to life's questions, both large and small. With around 85 percent of the search-engine market, including that of Germany, Google has become the modern version of the Delphic oracle. 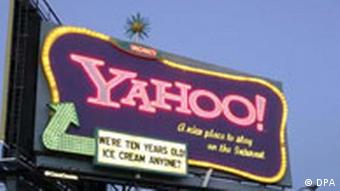 To an everyday user, the fact that there is one main method of sifting Internet information may seem like no big deal. And few people doing a search on Google or one of its competitors (Yahoo, MSN, and Alta Vista make up most of the remaining 10 percent of the market) give much thought to the fact that they are using the services of a for-profit US company.

But for Wolfgang Sander-Beuermann, head of the search-engine research lab at the University of Hanover and part of a growing cadre of European Google-skeptics, the situation is downright dangerous.

"Google is on the way to becoming the most global media power that ever existed on earth, and the potential for misusing it is so enormous it cannot be accepted," said Sander-Beuermann, who also founded the nonprofit Association for the Promotion of Search Engine Technology and Free Access to Knowledge (SuMa).

Another man on the case is French President Jacques Chirac, who is pushing an initiative for France, together with Germany and perhaps other EU nations, to develop a European search engine to compete with the American behemoth. 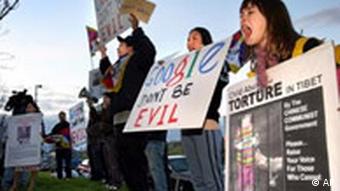 Google agreed to censor its internet searches in China, and the US saw protest demonstrations

"We must take up the challenge presented by American giants like Google and Yahoo. There is a the threat that tomorrow, what is not available online will be invisible to the world," Chirac said in a presidential address to the nation at New Year's.

His project, spurred by the French government and headed by an Internet information company called exalead.com, runs under the name Quaero (Latin for "I seek.") Germany's only link to Quaero at present is an agreement between a German meta-search engine, metager.de, and exalead. But several technology and information companies are considering the project. They include Siemens, Bertelsmann, and public broadcaster ARD (which Deutsche Welle and this Web site are part of).

Whether or not Europe can still catch the information-society boat is uncertain, according to Sander Beuermann. But it is critical that Europe try: "Access to the online economy, and being part of the whole information society" is at stake, he said.

For one thing, a single-access source for Internet information is overly susceptible to market forces, activists argue. Since the advent of Google, a booming business has sprung up in search-engine optimizing companies, whose sole job is to help manipulate Google's algorithms and push their clients' Web sites up the Google rankings.

"It is helpful to the search-engine optimizing companies that there is only one search engine that has to be cheated," Sander-Beuermann said.

While a typical Google search might turn up dozens of pages of information ranked by relevance, statistics show only 15 percent of users ever look beyond the first page -- indeed, beyond the first few entries.

"If you want your opinion to land in the Google Top 10, I am very sure that with enough money, you can buy your way into the Top 10," Sander-Beuermann said.

And if you add the word 'Helen'?

Hendrik Speck is a lecturer in computer science at the University of Kaiserslautern, and is a strong Quaero activist. He seconds Sander-Beuermann’s concerns, and cites the example of searching for the keyword "Troy" on Google.

"We all know that keyword has a rich cultural history. But at Google, most of the first results are a description of a second-class Hollywood production featuring a third-rate actor," Speck said, referring to the movie starring Brad Pitt.

That example may be funny "until you realize how important the Internet has become as an information source among young people," Speck argued. "My (college) students don’t subscribe to newspapers or magazines, and even TV consumption is down. The trend in everything is down except online or rich text media."

Sander-Beuermann also sees a sinister threat in Google’s increasing scope of services. "It is branching out from being a search engine into all online business," he noted. "There is Google mail, Google print, Google wallet (an online payment service) … the next step is for Google to buy a bank like Visa," he said. 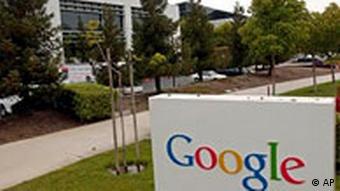 For Sander-Beuermann, the worst-case scenario would be if Microsoft were to buy Google -- a rumor that runs through Wall Street on occasion -- creating an ominipotent information megalith.

Yet if the idea of information-access being at the mercy of market forces is worrisome, Quaero activist Speck says privacy is the issue of real geopolitical concern. "The cartel of Google, MSN, and Yahoo constitutes de facto a national security risk for all European countries," said Speck.

"The current market leaders are not based within Europe; they can compile huge databases and profiles about European users, and these data centers do not necessarily fulfill strict European privacy protection laws. And they participate in censorship efforts and they even cooperate with authoritarian regimes," he said.

Speck sees a dire need for an awareness campaign on the issue. Google has a huge de facto monopoly, "and nobody cares," he said."“Compare it to the rest of the German media scene, where a TV station with 20 percent of the market has a tough time with the federal cartel commission." 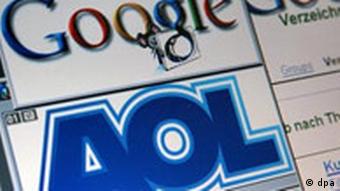 Google has innumerable partnerships -- in this case, with AOL

Activists acknowledge that any government-funded search engine would come with its own limitations -- censorship could be an issue, for example. But Speck heartily endorses Quaero as the development of a specifically European competitor to Google.

"With Quaero … Europe can develop alternative technologies that do not only take the commercial interests of a few American companies into consideration. Quaero has the potential to represent European values and norms, provide transparent search engine results and technologies, and protect the privacy of European citizens," he said.

It is not yet clear how much European investors will ultimately be willing to spend, but their quest to build a rival to Google is likely to be very costly. Google spent $7.5 million (6.3 million euros) on one lab with 10 student in its development stages, "which is more than some of our universities have over here," Speck said.

Meanwhile, the US search engine behemoth continues to spend $400 million annually on research and development.

Assoc. for the Promotion of Search Engine Technology