German President Joachim Gauck has urged the EU to "pause" its agenda toward a closer union, warning that some citizens feel lost amid change. He said Europe remains a "great" peace project but needs "deceleration." 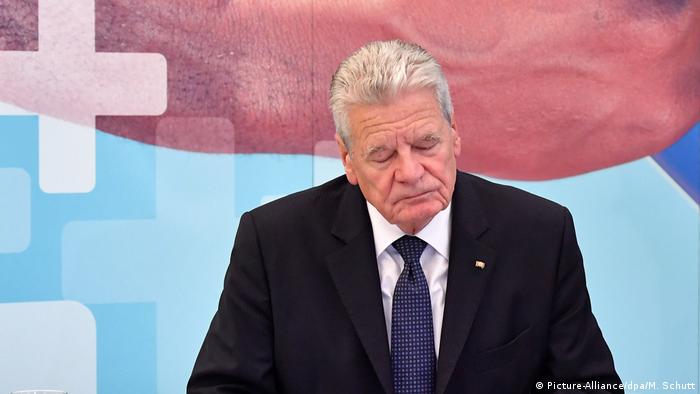 German President Joachim Gauck told Germany's "Welt am Sonntag" newspaper that he was worried that not all of the EU's 508 million citizens had the capability or the willingness to keep pace after decades of European integration.

Former Italian Prime Minister Enrico Letta meets with DW's Manuela Kasper-Claridge during the Ambrosetti Forum to talk about zero growth in the Italian economy, European integration and his prescriptions for the future. (05.09.2016)

The European Parliament and member state governments have finally reached a deal on the bloc's budget for next year. It's a compromise between temptations to spend more and national efforts to limit expenditures. (17.11.2016)

Satisfaction with life in Germany is scoring at its highest level for years, according to an annual survey. That's despite debate on Europe's crisis over refugee arrivals and terrorist threats. (18.10.2016)

He urged politicians to not only campaign for a united Europe based on peace, freedom, security and democracy but also for a sense of being at home and a sense of belonging.

"As a whole, we should think about a pause during which we discuss which goal we want to reach and at what speed," Gauck said, while praising the European project.

"We have developed a great concept with the European Union; a peace project that generations of us had not dared to dream [about]," Gauck said.

"But on the way to an ever closer union we were sometimes so quick that not all citizens were able to keep pace or wanted to do so," he added.

Similar sentiment had apparently also motivated some of those US citizens who had recently voted for President-elect Donald Trump, Gauck said.

The German president, whose four-year term as Germany's largely ceremonial head of state ends in February, said, "Not everyone feels like a world citizen."

Some people had difficulty in accepting that they should live in ever-growing spheres of activity resulting from European integration or increased globalization.

Prior to the collapse of communist East Germany (GDR) in 1989, Gauck was a Lutheran-Protestant pastor and church functionary based in Rostock who had roles in German reunification.

For 10 years from 1990, he headed the agency, nicknamed the "Gauck authority" tasked with overseeing and making public the archives of the former GDR's omnipotent Stasi intelligence agency.