Former president of El Salvador Elias Antonio Saca has been formally charged with embezzlement, illicit association and money laundering. Several members of his administration have also been arrested. 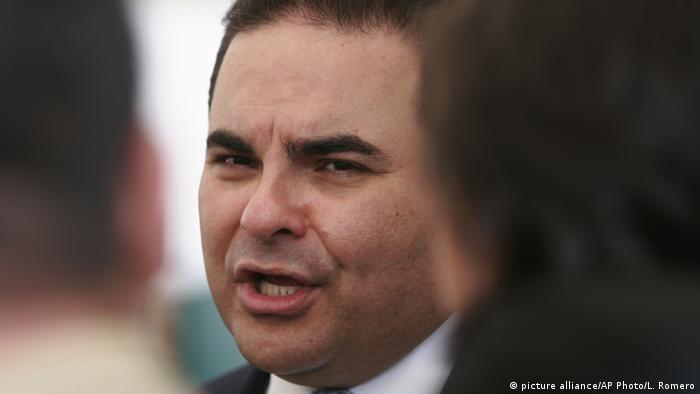 The former president of the Central American nation, Saca was already under investigation by a civil court for illicit enrichment. He was arrested during the wedding party for one of his children over the weekend and appeared in court Tuesday. He made no comment to reporters.

Prosecutors' agents have searched businesses linked to Saca, looking for evidence in a corruption case involving the alleged embezzlement of about $246 million (220 million euros) during his 2004-2009 administration. He was seen as a strong ally of the United States during his time in power.

El Salvador's Supreme Court has found a 1993 amnesty law to be unconstitutional. The law had helped bring an end to the nation's civil war but prevented investigations into human rights violations. (14.07.2016)

A judge in El Salvador has ordered the reopening of a probe into one of the most notorious massacres in recent history. The army's murder of hundreds of people in 1981 will bring up some very delicate questions. (02.10.2016)

El Salvador's state prosecutors have claimed the ex-president failed to properly document more than $700,000. But the former journalist said he is "suffering political persecution" in his home country. (06.09.2016)

Jorge Cortez said three firms were searched on Tuesday, and agents found "entire rooms filled with documents" that could be useful as evidence.

During the court proceedings on Tuesday, Saca and his former secretaries Elmer Charlaix, Julio Rank and César Funes were accused of setting up a structure which allowed them to divert $246 million of government funds to private accounts controlled by the secretaries. They then withdrew $116 million "in cash."

Investigators said they had started their investigations three months ago and found that at least $6 million had been laundered through Saca's business interests which included radio companies. Saca was a well-known journalist before becoming president.

All of the suspects are currently in the custody of the National Civil Police's anti-narcotics division.

In recent months, authorities in El Salvador say they have uncovered apparent high-level corruption stretching back decades and across political affiliations.

Both Saca's predecessor, Francisco Flores of the right-wing Arena party and his successor, Mauricio Funes of the left-wing FMLN have also come under scrutiny for alleged illicit enrichment while in office.

Flores died in January 2016 before his investigation went to court while Funes was granted asylum in Nicaragua.

The country's former Attorney General Luis Martínez was arrested in August for allegedly using his position to obstruct investigations into a prominent businessman, but he was released in September.

The suspects could face sentences of up to 15 years in jail for embezzlement and money laundering, according to El Salvador's penal code.