′Creepy clowns′ trend spreads in Germany ahead of Halloween | Germany | News and in-depth reporting from Berlin and beyond | DW | 23.10.2016

'Creepy clowns' trend spreads in Germany ahead of Halloween

Berlin, Rostock, Greifswald and Wesel: The creepy clowns trend from the US has arrived in Germany, and it's more than just a few isolated cases. Police have called the pranksters "idiots' and 'criminals." 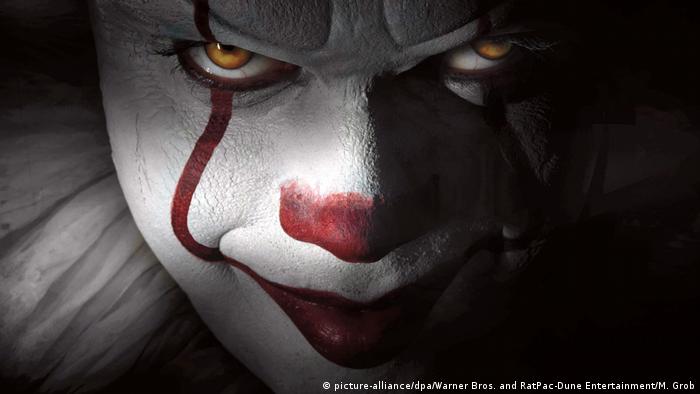 Berlin police said on Saturday that two masked men in clown costumes attempted to rob a 25-year-old man in the German capital's neighborhood of Schöneberg. The man managed to break free from the assailants, but the masked men were able to escape and police have opened an investigation into the case.

Prior to that, incidents were reported in several other areas in Germany: a person dressed as a clown and wielding a chainsaw terrified a woman in the western town of Wesel, the dpa news agency reported.

A 15-year-old in Rostock was chased by a clown with a knife on Thursday, and a 33-year-old deaf man was injured in a knife attack by two men wearing clown masks in the German city of Gelsenkirchen.

Now, police have warned of more possible attacks on Halloween, fearing the holiday will make it easier for people to mask themselves as clowns and prank strangers, or even commit crimes. 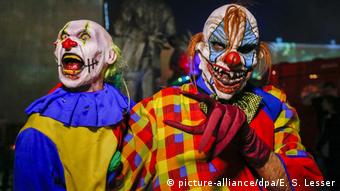 "To scare someone in such a disgusting way is an assault"

"I'm afraid that the ugly trend of clown attacks will spread in the big cities over Halloween," the head of Germany's main police union, Rainer Wendt, told the "Huffington Post" news website on Thursday. "The clowns are not only idiots but criminals. To scare someone in such a disgusting way is an assault."

"We understand fun - but not every type is fun," Berlin police wrote in a statement on Facebook trying to explain the recent epidemic to the city's residents. "Online pranks are part of our everyday lives and many of them are really funny and make us laugh, too. Many - but not all."

The incidents in Germany come after dozens of people in multiple US states have reported being stalked or attacked by people in clown costumes. Many have taken to social media to express their anger over the scary phenomenon "imported" from America.

After several clown sightings were reported in states ranging from California to New York, the hashtag #IfISeeAClown began trending in the US. A Twitter account called @ClownSightings already has more than 340,000 followers.

"If I'd seen any clowns I would be dead by now," says Marjolein, a 26-year-old student who lives in the German town of Heidelberg.

"I hate clowns, and I really hope I don't happen across one on my way home at night," says David Jolly, a South African author living in Berlin.

Although some cases in Germany turned out to be pranks, police warned that "reactions out of panic are unpredictable." A mere joke could quickly turn into a tragic incident, even for the pranksters, as the victims might react in self-defense. If the hoaxes occur on the road, this could result in severe injuries, police added.

Comments keep growing under the Berlin police department's post on Facebook, with many people trying to understand how they should react when they spot a clown or are attacked by one, and whether or not they would be in trouble for acting in self-defense.

"What happens if a clown attacks me, and I hit him or kick him in order to defend myself?" one user asked.

"We can't say. Only a court can decide whether it was a self-defense situation," police responded.

Other users were wondering what means of protection count as self-defense and whether they are allowed to use pepper spray against a possible assailant.

Wendt has called on everyone who undergoes such an attack to report it to police, and urged judges to "impose the highest sentences, and that can be a jail term of several years," in order to put an end to the chilling trend.