A goal in each half ensured Russia won the opening game of the Confederations Cup against New Zealand in St Petersburg. But FIFA will face questions about the vast number of empty seats at the Krestovsky stadium. 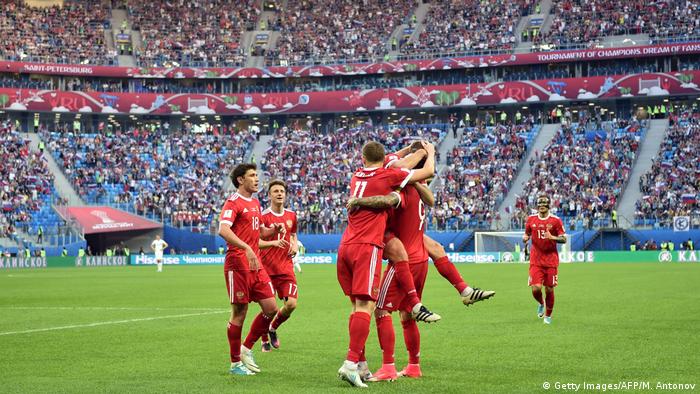 Hosts Russia got their Confederations Cup campaign off to the perfect start, easing to victory against a toothless New Zealand in St Petersburg.

Russian president Vladimir Putin officially got the tournament underway by addressing the crowd at the Krestovsky stadium, but it was far from a full house with a spattering of blue seats visible which will continue to raise questions about whether Russia is a suitable host for the tournament, and indeed the World Cup in a year's time.

The game itself was an open contest with plenty of chances, most of which fell to Russia – clearly the better side throughout. The first warning sign for New Zealand came in the seventh minute when Michael McGlinchley was forced to hack off the line after Viktor Vasin's header came back off the inside of the post.

It wasn't long before Russia had the lead, and it came courtesy of an own goal by Michael Boxall. The New Zealand defender threw himself at the ball in a desperate attempt to to deny Denis Glushakov's effort, but the All Whites player ended up in the goal with the ball, with Glushakov reeling off to celebrate with his teammates.

Russia always looked the more likely to add to their lead and New Zealand had their goalkeeper Stefan Marinovic to thank for a crucial double save before the break – first denying Dmitry Poloz's header and then Aleksandr Erokhin on the follow-up.

New Zealand survived until halftime without suffering further damage but Marinovic was called into action again soon after the break, keeping out another good effort by Poloz.

But New Zealand's resistence was eventually broken 20 minutes from the end, when Fedor Smolov tapped in Alexander Samedov's low cross from the right to put the result beyond doubt and give Russia an ideal start to the tournament.

New Zealand's best chance felt to Tommy Smith, whose header was cleared off the line by Yury Zhirkov but by then the damage was already done, and the All Whites will need to dramatically improve when they face Mexico in their next game, on Wednesday.