In a bid to prevent a repeat of last year's sex attacks, state police focused on men of North African descent on New Year's Eve. Police Chief Jürgen Mathies has faced criticism for praising the success of the practice. 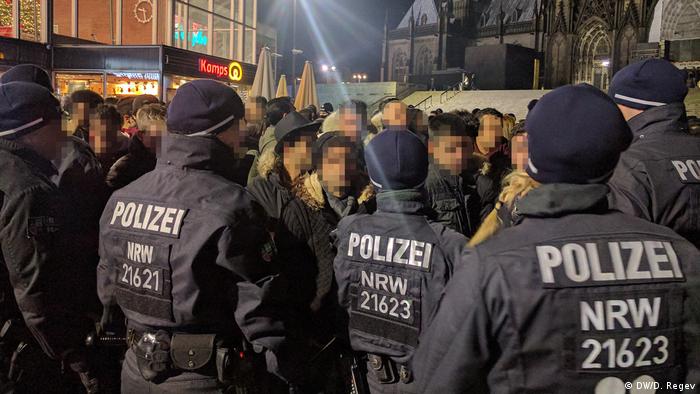 In the face of a heated debate in Germany over the alleged use of racial profiling during New Year's Eve celebrations on Sunday, police in the German city of Cologne defended their tactics.

Speaking to the press, Police Chief Jürgen Mathies admitted that yes, officers had specifically targeted men who appeared to be of North African extraction to undergo police checks, but said that "for the vast majority, there was a clear threat of criminal activity present." He also stressed that the security checks had not only targeted people of North African appearance.

Authorities also came under fire for the use of the shorthand "Nafri" to refer to these men - openly and on social media.

"At the central station we have checked hundreds of Nafris," read an update on the official Twitter account for the Cologne branch of North Rhine-Westphalia state police.

Green party co-chair Simone Peter said the heightened security in the city clearly limited violence and attacks during this year's celebrations - but she questioned the legality of police tactics.

"It raises the question of proportionality and legality when around 1,000 people were checked and partially detained based on their appearance alone," Peter told the "Rheinischen Post."

All eyes on Cologne

Security services were under pressure to prevent a repeat of the sexual attacks that occurred last New Year's Eve, when a group of 1,000 men of mostly North African and Middle Eastern origin unexpectedly descended on the square separating the Cologne's famous gothic cathedral from its main train station and molested hundreds of women.

This time around, the city deployed some 3,000 police officers, 300 of them in the cathedral square alone. Fireworks, an important tradition in German New Year's celebrations, were banned in the area around the square, with the city opting to present a light installation instead. Mayor Henriette Reker said the increased police presence - which included concrete blocks to prevent an attack in the style of recent atrocities in Berlin and Nice, where trucks were driven into crowds - was "necessary."

Revelers in the square seemed cautiously pleased with the outcome, telling DW that they felt safe and wouldn't have let what happened last year dampen their celebrations.

Police: Groups of men just as aggressive as last year

Mathies said "we had groups of people who were comparably aggressive," to the men who had carried out the attacks last year. According to the police chief, after checking the identification of 650 people, 190 were ordered to leave the area, 92 were taken into custody and 27 were placed under arrest.

Christopher Lauer, a former politician with the protest Pirate party and the Social Democrats (SPD), seemed to sum up much of the social media reaction to the police's actions and the use of the term "Nafri." Speaking to German news agency DPA, he called the move "sweeping prejudice against an entire group of people based on their appearance."

Satirist Jan Böhmermann, who became famous earlier last year for incurring the wrath of Turkish President Recep Tayyip Erdogan over an insulting poem he read on air, asked on Twitter: "What exactly is the difference between Nafri and Negro?"

Police Chief Mathies did say that he thought it was a mistake to use the term on social media, but stood by calling North African men "Nafris" as part of police jargon. He added the caveat that he naturally does not believe that all North Africans are criminals.