Bayern Munich were fully expected to get their Champions League campaign underway with a big win over Rostov. Carlo Ancelotti's side didn't disappoint at the Allianz Arena. 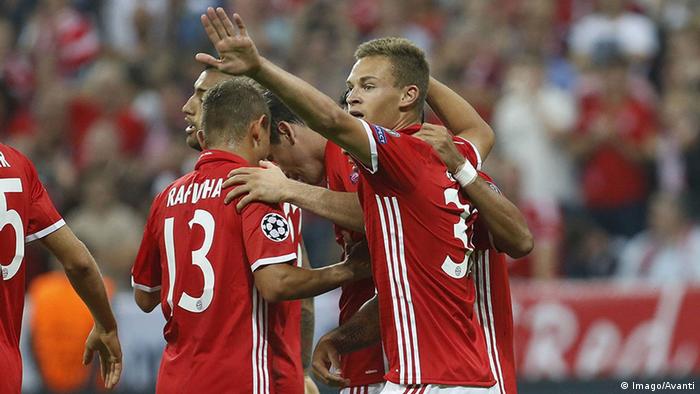 Joshua Kimmich continued his impressive start to the season as Bayern Munich got their Champions League campaign underway with a 5-0 win over FC Rostov.

The 21-year-old followed up his first international and Bundesliga goals with a second-half brace against the Russians, after Robert Lewandowski and Thomas Müller had ended the game as contest by half-time. Substitute Juan Bernat finished the scoring late on.

In his first Champions League game in charge of Bayern, Carlo Ancelotti made four changes to the side which beat Schalke 2-0 on Friday night in the league.

Rafinha replaced Philipp Lahm at right-back and Franck Ribery made way for Douglas Costa on the left, whilst Arturo Vidal and Kimmich started in midfield ahead of Xabi Alonso and Renato Sanches. 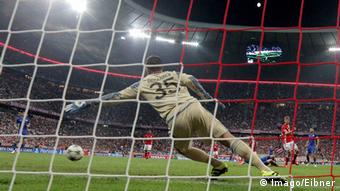 Thomas Müller marked his 27th birthday with a goal.

For the first ten minutes at least there was a semblance of a contest as the Russians sought to capitalize on sloppy passing in the Bavarian midfield, with Kimmich, Thiago and Vidal all guilty of conceding possession.

The visitors maneuvered the ball neatly through the center of pitch but Sardar Azmoun was always too isolated to showcase the ability which has made the 21-year-old Iranian the subject of interest from several top European sides.

But that was as good as it got for the visitors as Bayern's rejigged midfield began to dominate proceedings.

Progress was slow and chances were limited to deep crosses from Kimmich and Rafinha, whilst Douglas Costa tried to inject some pace from the left, forcing a free-kick from which Kimmich curled just wide.

As Bayern's possession statistics edged past the 70% mark half way through the first half, Lewandowski was wrestled to the ground by Rostov captain Aleksandr Gatskan when trying to attack a Kimmich corner.

Referee Anthony Taylor had no choice but to point to the spot, from which the Polish hit-man duly scored, sending Soslan Dzhanaev the wrong way.

Bayern began to move the ball more quickly and with more confidence, safe in the knowledge that their guests had long abandoned any intentions of attacking.

They should have had a second penalty five minutes before half-time after Miha Mevlja caught Mats Hummels in the face with a high foot, but the Mancunian referee blew only for a corner.

Rostov would have been happy to reach half-time with the score at 1-0, but even this faint hope was snatched from them in first-half stoppage time. 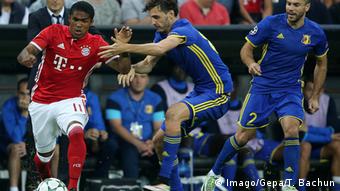 Douglas Costa returned from injury in the win over Rostov.

Bayern moved the ball quickly out to the left hand side via Costa and Alaba, whose whipped cross was pounced upon by Müller on his 27th birthday.

With the contest as good as over, it was time for Joshua Kimmich to take center-stage in the second half.

The 21-year-old followed up his first international goal vs Norway and his first Bundesliga goal vs Schalke with his first Champions league goal – a predatory finish inside the six-yard-box from a Douglas Costa cross.

Five minutes later, he proved he is just as dangerous in the air, timing his leap perfectly to head home Juan Bernat's cross for 4-0, after Lewandowski missed his second open goal in two games, firing over from close range.

The visitors did force Manuel Neuer into action with five minutes to play when Aleksandr Erokhin headed dangerously towards goal, but they were quickly punished as substitute Bernat – on for Hummels - immediately made it five.

A comfortable evening's work for Ancelotti and Bayern who now look ahead to two more home fixtures against Ingolstadt and Hertha Berlin in the Bundesliga's "English week."