Leipzig gave their fans a spectacular finish in the first Bundesliga game in the Red Bull Arena. Meanwhile, Joel Pohjanpalo has the game of his life to give Leverkusen their first win of the season. 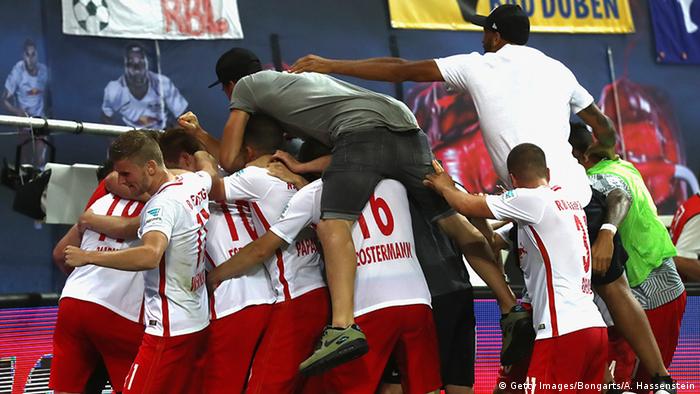 Leipzig finished spectacularly to record their first ever Bundesliga win in their first home game in Germany's top flight. The home side certainly matched Dortmund for most of the match, limiting them to just two clear-cut chances in the game. Ralph Hasenhüttl's young substitutes made the difference, as Oliver Burke picked out Naby Keita in the box to score the game's only goal. The defeat leaves Borussia Dortmund three points behind Bayern, which is an early blow to any title aspirations they have.

He spent the last two seasons on loan, but Joel Pohjanpalo looks like he's finally found his place at Leverkusen. The Finnish striker came off the bench to turn the game around with a career-best performance. Bobby Wood had given Hamburg the lead around the hour mark after Bernd Leno missed an interception. But Pohjanpalo saved the day, heading in a spectacular cross from Julian Brandt before adding two more goals in stoppage time. The performance gave Leverkusen a much-needed victory before they start their Champions League campaign next week.

They struggled in the German capital last week, but Freiburg got it right in front of their own fans by putting an end to Gladbach's winning streak in their first home game of the season. Thorgan Hazard put Gladbach ahead in the first half by smashing a left-footed effort into the far corner, but Maximillian Philipp matched that with a right-fooded blast of his own in the second half. Philipp came up big again just before fulltime when he nonchalantly connected with a header down from Nils Petersen. Vincenzo Grifo earned a penalty moments later, and Petersen converted to put the game out of reach. Gladbach will have to recover quickly from their first loss of the season before their trip to Manchester in midweek.

Mario Gomez made his highly anticipated debut for Wolfsburg, but the German international could not give his new side a perfect start to the season. His best chance came in the second half, but the ball got tangled in his feet. Despite Timo Horn and Dominik Maroh being unavailable, Cologne kept their second consecutive clean sheet and remain undefeated.

Out to prove last season was not a fluke, Hertha defeated Ingolstadt to get their second win in a row. Genki Haraguchi set up Hertha captain Vedad Ibisevic to give the visitors an early lead. Just as he did on matchday one, Julian Schieber came off the bench and scored to seal the contest.

The Hesse derby was a fiery affair last fall, but the one on Saturday was much more subdued. Substitute Sandro Sirigu's cross ended up in the back of the net, gifting Darmstadt three points that could prove vital come the end of the season.