The toddler was on the shores of a lake outside a Disney hotel at the Florida theme park when the animal grabbed him. Police have killed four alligators in their as yet unsuccessful search. 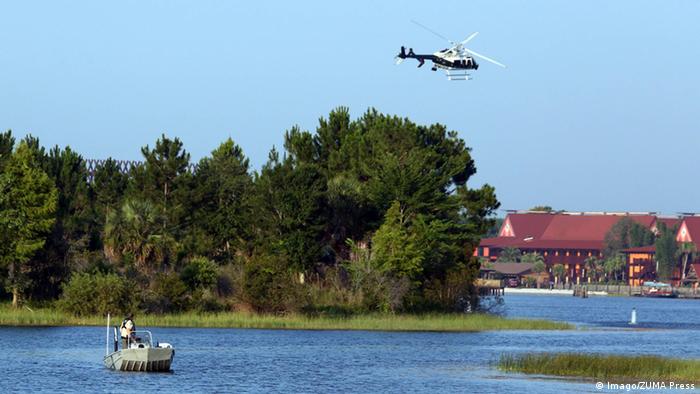 Florida officials comb a lake outside of Disney World, by air and by boat, for a toddler snatched by an alligator

More than 12 hours after an alligator snatched a 2-year-old boy from the shores of a lake at Disney World's luxury hotel near Orlando, Florida, authorities said they were continuing a "search-and-rescue operation."

Jeff Williamson, a spokesman for the Orange County Sheriff's Department, told a press conference Wednesday morning that the boy was snatched by the reptile shortly after 9 p.m. local time on Tuesday evening.

"We are very hopeful," he said. "Sometimes you get the worst, but we are hoping for the best."

The boy was reportedly wading in water about a foot deep when the alligator rose out of the lake and grabbed him. Both his father and mother tried to save him, but without success.

"The father entered the water and tried to grab the child and was not successful," Demings said. 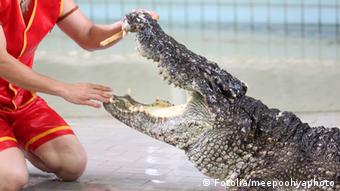 Signs on the lake's shore said "No swimming" but made no mention of the threat of alligators.

More than 50 police officers combed the large man-made lake overnight in search of the comparatively small alligator, believed to be 4 to 7 feet (1.2 to 2.1 meters) long. They killed four alligators in their failed attempt to find the one that snatched the boy.

The name of the boy and the family has not been made public. They were on vacation from their home in Nebraska.

Williamson, the sheriff's spokesman, brushed aside reporters' questions about the chances of rescuing the child so many hours after his disappearance.

"Right now, hopefully, we're searching for a little boy to bring the family some comfort," he said.

Nick Wiley of Florida's Fish and Wildlife Conservation (FWC) commission also said it was too soon to give up.

"If you look on a map you'll see it's a pretty extensive body of water," he said, referring to the lake being searched. Wiley also told reporters that alligator attacks on humans were rare.

The lake is part of the luxury Grand Floridian hotel, which lies across the lake from Disney's Magic Kingdom theme park.