Attacks in Yemen's capital have left 28 people dead and 75 wounded after a double blast at a mosque. The Houthi-run religious center had been targeted before. 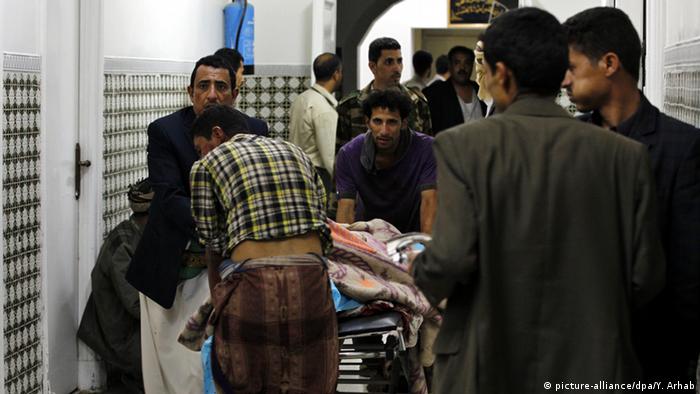 Yemen's capital was hit by bomb blasts at a mosque on Wednesday. The first blast was caused by a suicide bomber either inside or near the entrance to the al-Mo'ayyad mosque. As medics arrived to care for the injured, a second bomb was set off in a car by a suicide bomber.

The mosque was frequented by both Sunni and Shiite Muslims.

A message sent out on social media said a group in Yemen affiliated to the self-proclaimed "Islamic State" had claimed responsibility for the bombing as a revenge attack against the Shiite rebels known as Houthis who hold much of Sanaa and the country.

Earlier in the day, two Red Cross employees were shot dead in the northern province of Amran. It was a rare case of violence against humanitarian workers in the year-long conflict between Houthi rebels fighting alongside army units loyal to former President Ali Abdullah Saleh - and forces loyal to exiled President Abed Rabbo Mansour Hadi as well as southern separatists and local militias.

Mansour Hadi is currently based in Saudi Arabia. A Saudi-led coalition has carried out airstrikes against the rebels since March. Saudi Arabia's civil defense said Tuesday that seven people were wounded when a missile fired from inside Yemen struck three vehicles in al-Tuwal village in the Jizan border province.

The conflict has killed over 2,100 civilians, according to the United Nations.

In a report issued on Wednesday, US-based rights group Human Rights Watch said both sides had committed serious abuses against civilians and fighters in the port city of Aden.

"Southern forces that have regained control of Aden should end abuses against prisoners and do all they can to establish law and order in the city," Sarah Leah Whitson, Middle East director for Human Rights Watch said in a statement. "The Houthis need to release anyone wrongfully detained and account for everyone they are holding," she added.

Norway: Adrift cargo ship at risk of capsizing secured by authorities 0m ago

United States to restore funding to Palestinians 2h ago

Myanmar: Protests erupt in London after ambassador locked out of embassy 3h ago

Jordan's King Abdullah: 'Painful' palace crisis is over 3h ago