Afghan army and police forces suffered a 10 percent decline in troop numbers within 12 months, US watchdog SIGAR has said. The report comes as Afghanistan reels from the latest suicide blasts in Kabul. 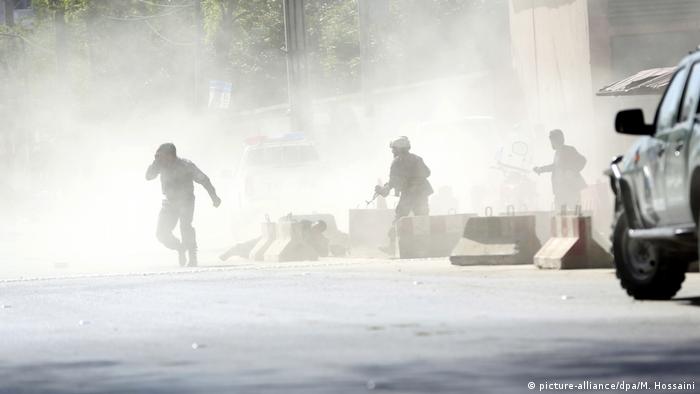 Afghan insurgents are gaining control over more of the population in the war-torn country as its security forces are rapidly shrinking, said the US oversight body dubbed Special Inspector General for Afghanistan (SIGAR) in a report published on Tuesday.

Between the end of January 2017 and 2018, Afghanistan's military and police lost about 10.6 percent of their manpower. The decline was "mainly due to large cuts" in the police force, SIGAR said in their report.

Also, around 12 percent of Afghans now live in areas which are "controlled or influenced" by the Taliban and other insurgent factions. A year ago, they only held sway over 9.6 percent of the population. The SIGAR report also estimates some 65 percent of Afghanistan's 34.6 million people lived in areas controlled or influenced by the Kabul government as of January 2018. The rest of the country is considered "contested."

Since US forces invaded the country and toppled the Taliban regime in 2001, Washington's top priority was to build up new security forces which would be a match for the jihadis. However, the military and the police have been consistently plagued by low morale, corruption and desertion. Most notably, the security forces were targeted by insurgents going undercover and joining their ranks only to commit attacks from the inside.

The jihadis, including the "Islamic State" (IS) militants, also increased their attacks on civilians in urban areas. On Monday, twin blasts in Kabul killed nine reporters, including Shah Marai, who worked as a photographer for the AFP news agency. A separate blast claimed the life of BBC's Ahmed Shah near the Pakistan border later on the same day.

Commenting on the Kabul blasts, US Defense Secretary Jim Mattis said they showed the militants were "on the backfoot."

"This is the normal stuff by people who cannot win at the ballot box, so they turn to bombs," he said. "We anticipated that they would do their best to try to bring bombs right into Kabul."

Previously, Mattis told US lawmakers in Congress that his goal for Afghanistan was "a more capable Afghan force, between their military and their police [and] the violence levels going down."

The Taliban have been gaining territory since NATO troops nominally ended their combat operations and switched to training and advisory roles in support of local troops in 2014. However, around 14,000 US military personnel are still deployed the country, including special forces fighting jihadis on the ground.

A deadly bomb blast targeted a crowd of mourners during a funeral in east Afghanistan, capping a string of major terror strikes to hit the country in December. The Taliban denied any involvement with the bombing. (31.12.2017)