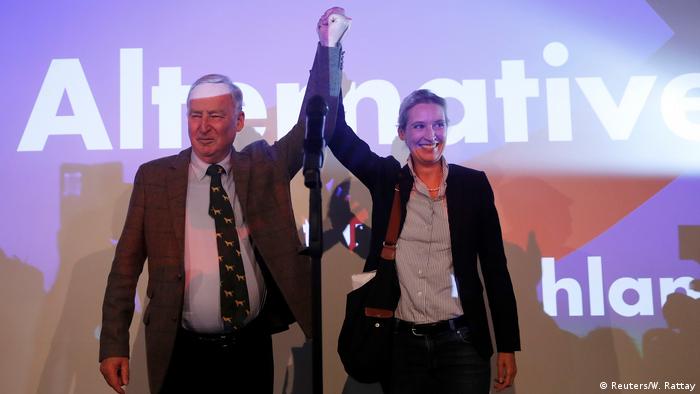 It was an unlikely decision back in April. And, with only 67.7 percent of the Alternative for Germany (AfD) voting in favor of the party's 2017 federal candidates, the choice of Alexander Gauland and Alice Weidel as party heads was anything but convincing.

Read more:  10 things you need to know about the AfD

In the party's manifesto, the AfD had dire news for Germany's democracy: A "secret sovereign ... has cultivated itself in the existing political parties."

It is through the very ranks of Germany's political establishment, however, that the 76-year-old Gauland learned the trade that he is now putting to use with the AfD. 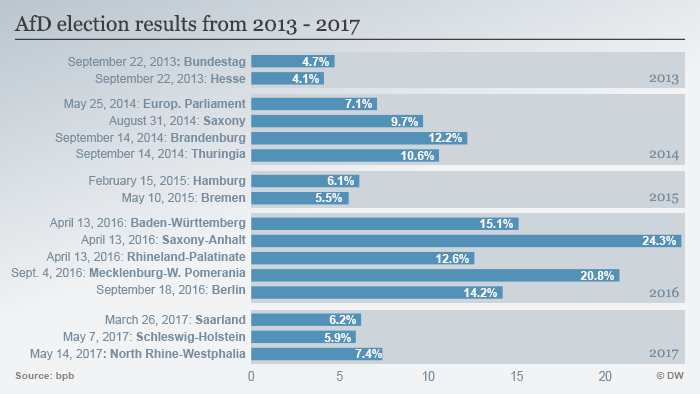 Born in the eastern city of Chemnitz in 1941, Gauland would flee the German Democratic Republic at the age of 18 to study law and political science at Philipps university in Marburg. However, as large numbers of displaced people sought asylum in Germany in 2015 and 2016, Gauland was quick to say that his own experience had not been that of a refugee.

"That is something else: I'm German," Gauland said. "And I went from Germany to Germany. It is quite different when someone comes from Eritrea or Sudan. He has no right to the support of a foreigner. "

Before AfD party leader Frauke Petry was even born, Gauland had already begun his career as a member of the conservative Christian Democrats (CDU), working at the parliament press office in Bonn, then the capital of West Germany. By 1975, he had moved to the Scottish capital, Edinburgh, to work as a press officer at Germany's general consulate. For over 30 years, he has worn a tweed green jacket, the kind most commonly associated with the aristocrats and landowners of Britain's past.

Upon returning to Germany, Gauland became the right-hand man of the CDU's Walter Wallmann, the mayor of Frankfurt at the time. Standing by Wallmann as he served both as Germany's environment minister and later the state premier of Hesse, Gauland became widely regarded as one of the CDU's best-versed advocates of free enterprise.

In 1991, after the coalition of the CDU and Free Democrats (FDP) gave way to a Social Democrats-Greens government in Hesse's state election, Gauland began his second career as a publicist and became editor of the cross-regional daily Märkische Allgemeine in Potsdam, where he stayed until 2005.
It was arguably his published books on conservatism, in which his tone became increasingly gloomy and pessimistic, that are most emblematic of his shift to the right and his eventual move to the AfD.

In his best-known book, 2002's "Anleitung zum Konservativsein" (Instruction on Being Conservative), Gauland bemoaned what he considered the diminished roles of concepts such as "Heimat" (homeland) and "deutsche Leitkultur" (German dominant culture) in political discourse. Railing against the "fun society," he also demanded a "deceleration" of technical progress. But it would take another decade before Gauland jumped ship from Chancellor Angela Merkel's CDU and joined the AfD.

Together with the publicist and journalist Konrad Adam and economist Bernd Lucke, Gauland founded the euroskeptic Wahlalternative 2013 (Election Alternative 2013), which quickly became the AfD.

By February 2014, Gauland was elected regional chairman of AfD Brandenburg and led the party into the state parliament with 12.2 percent of the vote just seven months later. Now, Gauland has his sights set on surpassing the 5 percent vote threshold for the AfD to enter Germany's federal parliament in Berlin.

During last year's Euro 2016 football tournament, the AfD was forced to apologize after Gauland said Germans valued national player Jerome Boateng - whose father is from Ghana - as a sportsman but "would not want to live next door to someone like him."

Earlier this year, Gauland called for a ban on Muslims, and in 2016 he said that "not everyone who holds a German passport is German."

Alice Weidel's history is much less documented than her running mate's. Faced with Gauland's outlandish statements, her mission is seemingly to represent the moderate wing of the AfD, creating the image of a party with broader appeal.

Read more: Alice Weidel — the pride of the populists

At first glance, the 38-year-old Weidel could be a member of Germany's liberal FDP. She is a trained economist, investment banker and startup entrepreneur with several years' experience of living in China.

Even her private life is liberal compared with the image of the AfD. Weidel lives in Switzerland with her long-term female partner, who hails from Sri Lanka, and their two children. In contrast, the AfD, according to its manifesto, seeks to motivate Germans to bring more children into the world to preserve the country's "own constitutive people" - a description that bears worrying similarities to the notion of the "Mutterkreuz" (Mother's Cross) awarded to women during the Third Reich for producing offspring with "German blood."

Though Weidel might come off as a liberal in the far-right AfD, that didn't stop her from declaring upon her election in April that "we are the only party for Germany!"

The most applause came, however, when she addressed the results of Turkey's recent controversial referendum, telling supporters of President Recep Tayyip Erdogan in Germany to "go back to Turkey!"

Just weeks before the September 24 election allegations emerged that Alice Weidel had illegally employed a Syrian refugee as cleaner.

And then an email surfaced which Alice Weidel wrote in 2013. It severely dented Weidel's image as a moderate voice.

"The reason why we are overrun by culturally foreign people such as Arabs, Sinti and Roma is the systematic destruction of civil society as a possible counterweight from the enemies of the constitution by whom we are governed," the Welt am Sonntag newspaper quoted the email as saying.